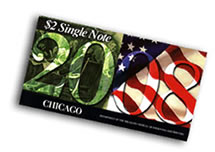 The Chicago note will be the fourth $2 collector bill released in 2008. The Atlanta $2 single notes were first off the printing presses in January followed by the New York $2 notes in February and the San Francisco $2 notes in March.

Each of the previous notes were sold out almost within hours of their availability.

In addition to the above specifications, the new $2 note product also is:

When the notes are available, they may be purchased online through the BEP website.