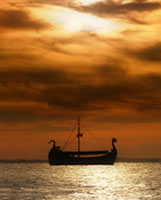 For an archaeologist, the words "Viking", "Coins" and "Sweden" are likely to bring to mind Sweden’s island province of Gotland, a known Viking hub or trading center where several hundred silver coin hoards have been discovered over the years. (See map of Gotland).

In just a bit of an unusual twist, a treasure trove of Viking silver coins have been found on Sweden itself. The Local, a Sweden news site, reports 450 silver coins were uncovered by archaeologists from the Swedish National Heritage Board—an agency of the Swedish government responsible for preserving Sweden’s heritage and historic treasures.

Typical Viking hoards contain coins from multiple countries, testifying to their traveling exploits. This instance was no different with some coins coming from Baghdad and Damascus and from a period somewhere between 500 and 840 AD.

The Local reports that the silver coins were found by a grave which may be 1000 years older than the coins. They were located near Sweden’s Arlanda airport. (See Arlanda, Sweden map).

For the very short The Local article, read Viking treasure found near Arlanda.

What kind of Silver Coins Viking Hoard included? Did Viking also had Gold Coins or even Platinum Coins? Is any Viking took interest being a Numismatist? Or just making a living?

1) The coins usually found in Swedish Viking hoards are silver dirhams. These coins are found in Viking hoards in the Baltic Region, Russia, Ukraine and Central Asia. Silver dirhams were made by the Abbasid, Umayyad and Arab-Sassanian states of the Middle East… these states were trading partners of the Vikings. Silver dirhams were also made by the Samanid empire of Central Asia, also a major trading partner. Some silver drachms of Sassanid Persia were also found in Swedish Viking hoards. Silver hexagrams of the Byzantine empire are found as well, but these coins are rare. Norwegian and Danish Viking… Read more »