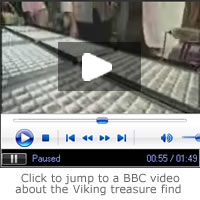 What better to talk about than another treasure find? The other day more news on the $500M sunken coin treasure popped up and now a huge hoard of Viking treasure is getting all the attention!

This one you can really appreciate. A father and son were walking their metal detectors along a farm field in northern England when they got a “hit”. After some digging, they discovered a pot of gold. Almost literally!

Apparently the find is the largest of its kind within England for the last 150 years. The pot was made of silver and lined with gold. But more importantly, it was packed full with over 600 silver coins and other historical significant objects that came from several different countries. Those Vikings could travel… Many of the items dated back to the early 10th Century, including at least one item from the early 9th. Wow!

The treasure was actually discovered in January by the father and son team but the British Museum in London just recently made the announcement.  You can learn more and also watch a video of the find by visiting BBC News. You can also see several photos of the treasure by clicking here.