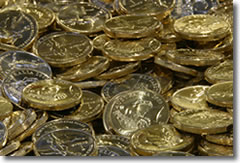 Family owned, Australian business, Australis Engineering P/L has won the tender to update the Royal Australian Mint’s materials handling and warehousing system. The new system along with the refurbishment of the Mint’s facilities in Canberra and other modernisation projects is central to the Mint’s objective of becoming one of the best manufacturing facilities in the world.

The project provides for the complete design, supply, installation and commissioning of equipment and systems. This project will address all aspects of materials handling, warehousing and inventory control from receipt of blank coin, through manufacturing and production, quality control and warehousing, to the despatch of finished circulating coins.

The project will align with the current building refurbishment project, with delivery programmed for March 2009. The total value of the materials handling and warehousing system contract is $7.4 million

“Australis’ proposal is state of the art. Along with the refurbishment project the new automated system using robots, automated guided vehicles and a unique multi-axis bucket elevator blank delivery system will ensure the Mint is a truly modern manufacturing facility that will not only meet all the Mint’s stated requirements but will attract thousands of additional visitors to the upgraded public gallery when the refurbished Mint reopens to the public in early 2009” said Ms Janine Murphy, CEO of the Royal Australian Mint.

“Australis Engineering is proud to have won the contract and very keen to be associated with the Royal Australian Mint as it undergoes a significant period of upgrading and modernising all aspects of its operations” said Mr Phillip Gustafson, Managing Director of Australis Engineering.