London, England. — Spink, the world’s leading auctioneers of Coins, Stamps, Medals and Banknotes, Bonds and Share Certificates, based in London and established 1666, has acquired R.M. Smythe & Company, specialists in Antique Stocks and Bonds, Banknotes, Coins, and Autographs, based in New York City and established in 1880.

Both Spink and Smythe are known around the globe for their illustrious histories, impeccable reputations and unparalleled expertise.

The merging of these two companies is the next logical step in line with Spink’s strategy for the future and will create the first truly global, fully integrated, collectables house. 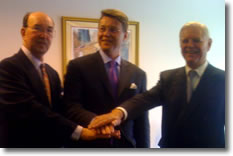 Spink is pleased to announce that John Herzog, owner of R.M. Smythe & Company since 1967, has become a shareholder in Spink. Mr. Herzog will act as Chairman Emeritus of Spink USA and will participate in the development of the combined entity which is valued in excess of $100million by this deal.

Mr. Herzog stated, “I could not think of a better company to acquire Smythe. My wife, Diana, and I have been at Smythe’s helm for 40 years, and have tremendously enjoyed building the business and working with clients and collectors. I look ahead with great excitement to the opportunities presented by this joining of forces.”

Since their founding in 1880, R.M. Smythe and Company has developed into one of the world’s premier auction houses, specializing in Antique Stocks and Bonds, Banknotes, Coins, Autographs and Photographs. In 2007 Smythe hosted six major auctions setting record prices for historical autographs, currency, coins, stocks, bonds and antiques.

To Spink this deal brings with it an even more prominent position in the American market following the recent acquisition of Shreves Philatelic Galleries. In America, as is already the case in Europe, Spink will continue to operate as a strong competitor in the world of collectables with a “boutique” approach to the business.

In 2007 Spink was already number one globally for stamp auctions. In 2008, Spink USA will strive for the same prestigious position in all categories in which they deal and auction. The acquisition of Smythe brings them closer to realizing this goal.

Olivier D. Stocker, Chairman and CEO of Spink, stated “This acquisition is really a powerful match. It instantly creates a leadership position for Spink in Banknotes, Bonds and Shares and Worldwide Coins. We believe it is the perfect strategic move to better service our clients and continue to obtain the best results for them.”

Accredited media interested in scheduling an interview to discuss this release in more detail are encouraged to contact Emily Johnston  +44 (0)20 7563 4009 (ejohnston@spink.com)

Spink is the world’s leading auctioneer of coins, stamps, medals and banknotes with offices in London, Singapore, New York and Dallas.  Since its foundation in 1666, the Spink name has become synonymous with tradition, experience and integrity. Holders of three royal warrants and numerous records for prices achieved at auction, Spink offers an unparalleled range of services to collectors worldwide.

Roland M. Smythe established R.M. Smythe & Company in 1880 for the purpose of providing the financial community, and private individuals, with accurate information concerning obsolete securities and banknotes. Over the years, they have established an outstanding reputation for their high standards of customer service and the quality of their merchandise.

Gentlemen: We have Stock Certificates from the 1950’s. Can you determine their Equity Evaluation and Value as Collector’s Item?

I was going through my grandmom’s things and old pictures when I came across an original Wilson Voting Machine Company Capital Stock (signed and sealed) dated January 21, 1916. Can anyone direct me in the right directionon how to determine its worth?

The certificates are sealed. Do they have any value? Thank you.
Judy Wallace

I have some Confederate States of America loans and notes. What is interesting is a few say payable two years after the ratification of a treaty of peace with the United States of America. Any input/advice as to potential value and recourse as to how to follow up to ascertain would be much appreciated.