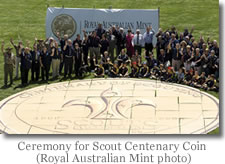 The Royal Australian Mint kicked off the introduction of a new circulating one dollar coin and a series of new collector coins with a gigantic and symbolic coin commemorating the Centenary of Scouts Australia.

The model coin was the largest ever produced by the Mint at an impressive 400 times the size of the normal one dollar circulating coin.

Its unveiling appropriately took place in front of a group of children and young adults who represented various scouting groups across Australia.

Senator the Hon Nick Sherry, Minister for Superannuation and Corporate Law, made several comments at the ceremony. 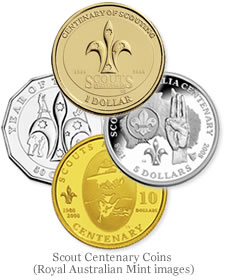 “Scouts Australia was founded 100 years ago. We all know just how big a part of our culture the Scouts have become since then, with over 60,000 scouts spread across the country.

“Launching this coin is a perfect way for everyone in Australia to remember the achievements and contributions of the scout movement founded by Lord Baden Powell over the past century. The Government is very happy to recognise this incredible contribution and has declared 2008 the Year of the Scout.”

“Today, this giant coin is symbolic of the equally giant contribution that Scouts have made to Australia …"

The Mint’s website reflects the production of Australia’s decimal coinage since 1966 using standard circulating coin designs, including the echidna, the lyrebird, the platypus, the Coat of Arms, the kangaroo and the Aboriginal elder.

Until the addition of the Scouts theme, only 14 designs have been produced to commemorate an organisation or an event on the one dollar coin.

The following information is provided through the Mint for the Scout Centenary circulating and collector coins. 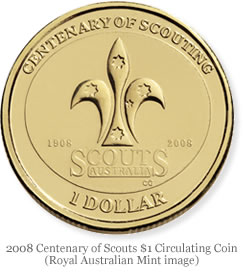 The new Scouts commemorative dollar will enter circulation and join the standard one dollar five kangaroo coin starting in April of 2008. Both coins are exactly the same with the exception of the reverse design.

The collector series of coins honouring the Scouts have been available since February 4, 2008. They include: 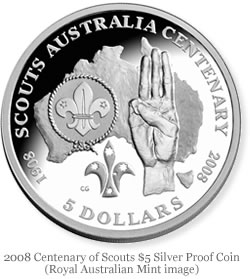 The $5 Silver Proof Coin is priced at:

The specifications for the silver coin include: 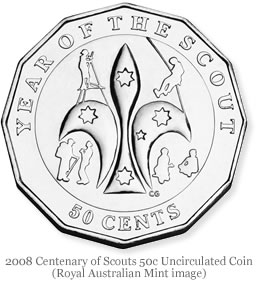 The 50c Uncirculated Coin is priced at:

The specifications for the 50c coin include:

*Coins are also available through a channel of Australian Coin Dealers.