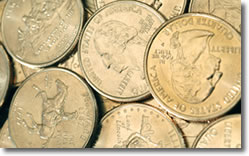 A blazing fast turnaround is not what you expect from the government, but that is exactly what the District of Columbia received.

2009 will see six new quarter-dollar coins that were introduced in the District of Columbia and United States Territories Circulating Quarter Dollar Program. D.C. officials received approximately 350 design suggestions for their commemorative coin and settled on three.

The area of the three designs receiving the failing grade was directed squarely toward D.C.’s desired inscriptions, "Taxation Without Representation." Although the words have been on D.C. license for years to focus public attention on its lack of voting rights, they were judged too controversial for a commemorative quarter.

"Although the United States Mint expresses no position on the merits of this issue, we have determined that the proposed inscription is clearly controversial and, therefore, inappropriate as an element of design for United States coinage."

The D.C. design proposals depict the "Stars and Bars" of the District flag, astronomer and mathematician Benjamin Banneker, and world-renowned musician Edward Kennedy “Duke” Ellington. These proposals will be changed, replacing the taxation statement with new words that still embody the Districts spirit.