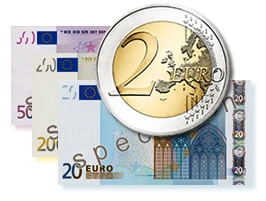 The European Central Bank (ECB) said yesterday that the switch from the Cyprus pound and Maltese liri to the euro is completed.

During the transition period, the euro or legacy currencies could be used in making payments. Feb. 1, 2008 marked the date where the euro became the only allowed legal tender currency for both countries.

The people of Cyprus and Malta adopted the euro on Jan. 1, 2008. The one-month dual circulation period went smoothly. According to the ECB,

"The cash changeover evolved in both countries as planned and no unforeseen circumstances occurred. Hence there was no need for the changeover plans to be adjusted. The progress achieved during the dual circulation period bears witness to the efficiency and effectiveness of the preparatory work …"

With Cyprus and Malta added to the euro zone, the total population using the euro is now around 320 million people. The 13 European Union countries who preceded Cyprus and Malta in adopting the euro were: Belgium, Germany, Greece, Spain, France, Ireland, Italy, Luxembourg, the Netherlands, Austria, Portugal, Slovenia and Finland.

I am glad that purchased Cyprus and Malta Euro Mint Sets for 2008. Now I have it. This 2 new mint sets must be best seller since 2002, when 12 European Nations switched to Euro.