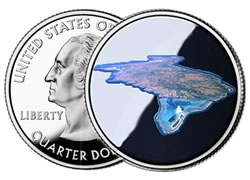 Guam has taken the first steps needed to begin the design phase of their new commemorative quarter.

Governor Felix Camacho has appointed his executive assistant, Shawn Gumataotao, as the Guam liaison to the U.S. Mint for the District of Columbia and United States Territories Circulating Quarter Dollar Program.

Gumataotao will lead the local design program and seek ideas from the public for the new Guam quarter that was authorized when President Bush signed the Consolidated Appropriations Act of 2008.

The signed law contained provisions for six quarter-dollar coins in honor of the District of Columbia and the five United States Territories. The new quarters are to be issued in 2009 at equal intervals and in the following order:

For Guam design concepts, Gumataotao was quoted as saying:

“What we’re looking for is the publics input the themes and the stories will be reflective or emblematic of Guam – what is that exactly. That’s what the people will determine, that’s we want them to decide.”

The Governor’s website summarizes several requirements for Guam’s commemorative quarter. First, and foremost, the deadline for design concepts or themes must be narrated and submitted by February 15, 2008. The following brief guidelines were provided:

The narrative, or story, must explain why the concept is emblematic of Guam and what the concept represents to the people of Guam. A narrative that merely describes a particular design is not acceptable.

Because it is important that the Nation’s coinage and currency bear dignified designs of which the citizens of the United States can be proud, federal law mandates that the Secretary of the Treasury shall not select any frivolous or inappropriate design for any quarter dollar minted under this program.  Federal law also states that no head and shoulders portrait or bust of any person, living or dead, and no portrait of a living person may be included in the design of any quarter dollar under the program.

More information can be found through the following sources (special attention should be focused on the U.S. Mint’s informational page):

Completed concepts or themes should be sent to:

Office of the Governor of Guam

They may also be e-mailed to guamquarter@guam.gov.