With the conclusion of the successful 50 State Quarters® Program in 2008, the quarter “baton” has passed hands from the states and moved to honor the District of Columbia and U.S. Territories with their six new quarters in 2009.

The hand off was on the rocky side initially for DC. On February 27, the United States Mint rejected their original design concepts because of the included phrase “Taxation Without Representation.” It was considered by the Mint too political and too controversial. DC officials shook the rejection off and they quickly submitted revisions the following day. The design process glided forward.

DC officials provided the following quarter design narratives to help the United States Mint create artists renderings or drawings for each quarter idea. The completed renderings in the form of images are included beside each narrative for reference, and a link toward the bottom of the page is listed to vote. 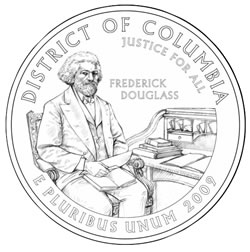 Overview of Frederick Douglass’ life and importance to D.C.

Frederick Douglass, the noted orator and abolitionist, was born into slavery in 1838, escaped to freedom in the North, soon becoming a prominent abolitionist orator. He settled in Rochester, NY for twenty-five years. Frederick Douglass was nationally known in his lifetime for speaking out against injustice for all Americans, in particular African-Americans and women.

Douglass moved to Washington, DC in 1872, eventually becoming the Recorder of Deeds for the District of Columbia before President Harrison appointed him Minister Resident and Consul General of the Republic of Haiti and Charge d’Affaires for the Dominican Republic.

One of the most recognizable historical Washingtonians, Frederick Douglass epitomizes the District’s struggle for basic rights in his escape from slavery, abolitionist cause, and the fight for women’s suffrage. Cedar Hill, the home where Douglass spent the last 15 years of his life, is now a National Historic Site, run by the National Park Service. 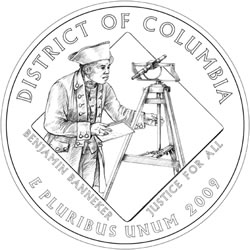 The elements to be included in the design are:

Overview of Benjamin Banneker’s life and importance to D.C.

Born in 1731 in Maryland, Benjamin Banneker was born free to a former slave and his wife. After his maternal grandmother taught him to read and write, Banneker taught himself to eventually become a mathematician, astronomer, and writer of almanacs.

In 1791, when he was 60 years old, Banneker was hired by prominent surveyor Andrew Ellicott to help the survey team plot the land for the new capital city of the fledgling nation. Banneker’s almanac was notable for his accurate predictions of eclipses.

The symbolism of his presence, a gifted black man in attendance at the creation of the nation’s capital, along with his other remarkable accomplishments, is undeniably one of the most significant testaments to the rich legacy of the District of Columbia. Key to the founding of Washington D.C., Benjamin Banneker’s image and memory represent ingenuity and progress.
1350 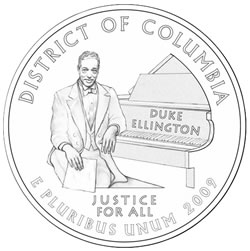 Overview of Duke Ellington’s life and importance to D.C.

Duke Ellington is an icon of Washington, DC history. He was born in the District of Columbia in 1899, raised in the LeDroit Park neighborhood, educated in DC Public Schools, and performed here as an adult.

A symbol to Washingtonians of the local-boy-made-good saga of American life, Duke Ellington was recognized as the preeminent band leader and jazz pianist of his day.

By the time of his death in 1974, Ellington earned 13 Grammy Awards and was bestowed with numerous honorary degrees and awards throughout the world, including the Presidential Medal of Freedom in 1969.

Honoring Duke Ellington on the DC Quarter is a fitting tribute to a man who played such an instrumental role in the history of jazz, the quintessential American musical form, and nods to the importance of musical contributions of all forms from the District of Columbia.

DC residents may cast a vote for their favorite design by following:

Cast your vote for the DC Quarter!

The voting period ends on June 18 at 5 p.m. (ET) with the winner announced in early July.

I think we should use Benjamin Banneker because he was born before this country was founded. No one would know about him if he wasn’t an option for the new quarters. I never know about him until just reading this to vote for the new design. He was so much into making what this country is all about. Life, Liberty and the Pursuit of Happiness for all who are born in this country or have come to this country. The others are truly great Americans also and have contributed to our vast complexity that the US has become, but I… Read more »