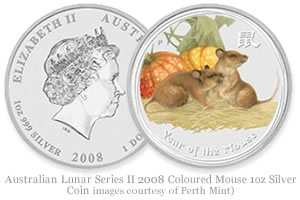 The Chinese calendar offers an intriguing system of time measurement that predates all other calendars. For coin collectors, its yearly changing of themes also makes it well designed for commemorative coins.

For this new year, there are several commemorative coins celebrating the event from at least two different countries.

To commemorate the ‘Year of the Mouse’, the Australian Perth Mint is offering several theme related coins in their 2008 Australian Lunar Series II collection. One example is their colourized legal tender Silver Dollar coin containing an ounce of 99.9% pure silver. It’s the first colourized edition from the collection and according to the Perth Mint:

The coin’s reverse depicts a coloured image of two mice on a bed of straw with pumpkins and a vine in the background.  As well as the inscription ‘Year of the Mouse’ and the Chinese character for ‘mouse’, the design also incorporates The Perth Mint’s ‘P’ mintmark.

This particular coin has a limited mintage of 3,800 with a purchase price of $56.36 (AUS) or $50.72 (US). For more information on this coin or the other Lunar Series II commemorative coins, visit the Perth Mint product pages:

China to Issue ‘Year of the Mouse’ Commemorative Coin

Today, the People’s Bank of China (PBOC) announced it will issue a new commemorative coin on Wednesday celebrating the Year of the Mouse (Rat). The mintage far exceeds the Australian versions, at 10 million commemorative coins.

Each has a value of one yuan, or approximately $0.138 US cents based on today’s exchange rate.

Currently, little information is available for the commemorative coins. However, a short Newstex article on the People’s Bank of China announcement follows.