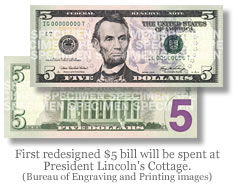 The first new redesigned $5 bill will be spent in the gift shop of President Lincoln’s Cottage at the Soldiers’ Home in Washington, D.C. on March 13.

The announcement was made today by the Bureau of Engraving and Printing (BEP).

Back in September of 2007, the BEP for the first time ever digitally unveiled the new bill redesign that promises to be “safer, smarter and more secure”.

The $5 bill will continue to feature President Lincoln, which provides the significance in having the first bill enter circulation through the Lincoln Cottage gift shop.

Also on March 13, Federal Reserve banks will begin distributing the new $5s to banks, who will issue them to businesses and consumers.