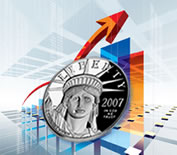 In further positives for platinum, its futures for January advanced to $1524 an ounce, hitting another record high in trading today.

With new highs for platinum, several coins are better bargains

The two proof coins within the set each contain a 1/2 ounce of platinum. That coupled with their unique collector value make their purchase price at least more palatable.

To comparatively place platinum’s upper movement into perspective, when the Mint announced their pricing for the anniversary coins, platinum futures were hovering around $1420 an ounce. That’s now approximately $100 less than today’s price.

Two additional examples of Mint products that now offer a bigger bang for the dollar:

Of course, that’s if the Mint doesn’t first suspend platinum coin sales, like they did with several Gold American Eagle coins.

Price of Platinum should reach $2000 per ounce by end of 2008! Remember that Platinum is 20 time more rarer than Gold! High demand of Platinum for catalyst and jewelly and coins will drive prices higher.