(IsraelNN.com) More than a year after it was first announced, the Bank of Israel has issued a new 2-shekel coin on Sunday – the first change in Israeli currency in nearly 20 years. Children will undoubtedly introduce it into the popular Chanukah game of spinning a top called a dreidel, in which scores are often tracked with coins.

The new coin is 2.16 centimeters in diameter – smaller than the 5-shekel coin and larger than the dime-sized 1-shekel coin. As with other Israeli coins, the 2-shekel piece’s design is based on ancient Jewish coins. It depicts the “horns of plenty” filled with grapes and wheat, alongside a pomegranate, that were engraved into the coins of Yehochanan Hyrcanus over 2,000 years ago. 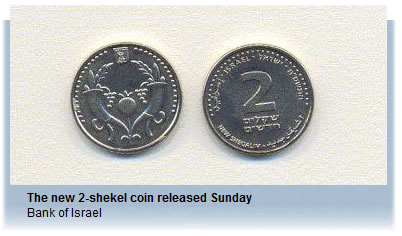 Yehochanan was a ruler during the Hasmonean period. His ancestors were the Maccabees instrumental in the battles of Chanukah that Jewry is commemorating this week.  The coin was to have been issued a while ago, but its production in the Netherlands was delayed.

The addition of the 2-shekel coin will streamline cash payments, the Bank of Israel says, chiefly for high-volume users but also for individuals searching for change in their pockets.  It will also save money in coin production and maintenance.

The new 2-shekel coin was designed to be clearly identifiable to the blind, with notches grooved into its side in four places.  The piece is nickel-coated and has the Hebrew year of issuance engraved on it.  Though it would have been worth some 45 cents when it was first announced over a year ago, the depreciation of the dollar has raised it to 51.6 cents.

Bank of Israel is planning to issue a new 20-shekel bill this coming February to replace the current one.  Made out of a type of plastic, it will be able to better withstand the note’s generally high usage.  On the other hand, the five-agorot coin will be phased out of use within a year.

Bank of Israel’s latest report states that the public held 25.5 billion shekels in cash in 2006, up 4.6% from the year before. In general, bills comprise 96% of cash circulation. Roughly half of the bills are 100-shekel notes, with the others valued at 20, 50 and 200 shekels.

This article was republished with the generous permission of IsraelNationalNews.com.

What is use for 2 Shekel Coins? It all about the coins. Just like 2 Dollar Bill in U.S. It end up like Susan B. Anthony Dollar Coins!