Collecting Coins What is Coin Toning? How Does It Affect Coins and Their Value? 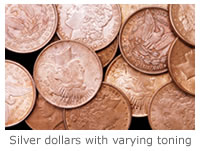 Coin toning can intrinsically increase or decrease the value of coins. Natural coin toning can be quite beautiful. It can also be outrageously ugly.

And because beauty is often times in the eye of the beholder, placing a value on a coin due to its toning can present problems.

Should you pay extra or less for toned coins? After all, a coin that’s toned is going through a form of corrosion, right?

What exactly is coin toning?

Toning is a term that describes the discoloration or light patina that forms on the surface of coins due to oxygen and chemicals in the air acting on the metal. This oxidation can result in a variety and level of toning and also depends on the properties of the metal – silver, gold, copper, nickel, etc.

Toning is a slow and normal process that can take months to years to appear. Should you worry about toning? If you’re storing your coins properly, don’t. Unless a coin is in a vacuum, it’s going to start at some point.

A coin that’s toned is in a normal "stage" of its life. It won’t disintegrate away before your eyes. Even in worst cases, the tone color will normally take centuries to reach its very darkest and usually its least attractive appearance.

In fact, you’ll hear coin collectors use the word toning often to a describe a coin’s natural and appealing discoloration.

We’re all familiar with tarnishing. Tarnish and toning are pretty much synonymous on the scientific scale. However, it’s more typical to hear that a coin is tarnished when describing one that appears discolored in an unnatural, spotted or artificial way.

How can you tell whether coin toning adds value to a coin?

There are several factors in determining the value of a coin, but at the very top for most people is its appeal. If a coin is ugly, unless extremely rare, people aren’t going to buy it and the value will be low. If a coin is attractive AND toned, it’ll likely be worth more.

But again, beauty is in the eye of the beholder. With that fact in mind, does it basically imply there’s a smaller market for toned coins? One could argue when there’s no other differentiation, a lustrous coin that looks like new will always have a better market reach and potential than a coin with attractive toning.

Of course, there’s the flip side of the argument. If coin collecting was all about shiny coins, collectors would have much less resistance when it came to buying cleaned coins. We know that’s not the case!

With all things considered, a coin’s value is always going to be higher when it’s NATURALLY attractive. Historically, beautifully toned coins that are older garner a premium. It’s not just beauty that sets them apart but their uniqueness.

Why? A shiny coin is a shiny coin. Everyone’s seen one. A toned coin that’s also attractive, however, isn’t something you see every day. A coin that is both unique and attractive is one that’s sought after by most experienced collectors. They’re rarer and, therefore, worth more money.

What coin toning colors should you expect to see?

As we first discussed, toning and its color will depend on a coin’s metal composition. Older coins can show more color variations due to multiple and less pure metal "blends". And metals like copper and silver can react more quickly and often times tone easier when exposed to the environment.

Here are some very general toning characteristics of the major metals in coins we know today:

Unfortunately, just as toning happens naturally with coins, it can also be mimicked artificially by "coin doctors". (Think of coin doctors as forgers.) If you Google the words "tarnish silver" for example, you’ll find "recipes" for ways to create a tarnished look on silver.

Why would anyone try to artificially tone a coin? It’s nearly always an attempt to improve a coin’s appearance so it can be sold for more. It’s not just to try and seek the premium dollars paid for gorgeously toned coins. More often than not, it’s to hide imperfections the coin already has.

In ANY instance or method applied to a coin to doctor its appearance, the value of the affected coin IMMEDIATLY declines SUBSTANTIALLY. You don’t want to buy them!

It usually takes some experience to recognize a coin has been artificially altered. If you don’t have that experience and you’re interested in a coin due to its toning, be cautious on how much you spend for it.

If your coin has gone through a grading service, you’ll at least have some protection. The last thing you want is to pay for what you think is a gorgeous coin only to later find out it was doctored, making it worth little.

I have a Georgia quarter with obverse having a swirl of light black. It seems as though it is mixed with the metal. On the reverse it is a darker black over the whole area. Do you think this is discoloration or possibly an error?

I have two american eagle silver dollars accompanied by a certificate of authenticity. I received them in mint condition but then after three months, they have both tarnished with a distinctive tarnish line running across of both faces of each coin. Both issued by the New York Mint. Will they replace these?

I use to be a pipe fabricator. I have worked with many types of metal up to titanium and you stated …After all, a coin that’s toned is going through a form of corrosion, right? . If you are asking a question or making a statement your wrong. Not all metals corrode. The more higher grades don’t unless they are contaminated with other hot temp. metals that come in contact with them. Grade of the metal makes a big difference like 316 stainless steel can be touched and set out in the air for a long long time and still… Read more »

A WELL KNOWN AREA COIN DEALER HAS GRADED IT AU-50 UPON PHYSICAL INSPECTION WITH VALUE OF AROUND $2000.

WOULD THE GRAYING OF THE COIN PREVENT A HIGHER VALUE IF IT WERE TO BE A MS TYPE ?

AU is almost uncirculated.. perhaps the coins has been physically touched by human fingers. The oils in our finger cause the loss of lustre and a coin goes from grades of perfect to almost.

I have a nickel that is multi colored. Like the metals didn’t mix correctly. Would this be worth anything? Have you ever seen one?

i have purchased over 400 morgan dollar coins over the past 20 years. I store them in my safe and about 3 years ago i moved them into a new case. The case is metal and has felt on the bottom and top but has slots that separate each coin and they are also packaged in coin holders made of light cardboard/and clear plastic film. Some of the morgans thru the years had some nice toning like rainbow. On thanksgiving day this year I was showing my oldest brother the coins and I was horrified. I had not even looked… Read more »

I bought a Four piece Lincoln 2009 bicentennial one cent proof set at a pawn shop . The obverse of the set is not toned meaning it looks perfectly proof.however the reverse of each penny has some orange/reddish color,or petina in each coin.being in its unopened government packaging.are these coins errors? And if NOT then does there value become affected by the toning?

I have a 1864 seated liberty dollar. I looked at counterfeits recently on them the motto in god we trust and also C.C below the eagle. The one I have is exactly the same as a real one. the same size thickness with a gold shinny tint. i just had it sent off for grading.The jeweler that sent it for me graded it as a AU65 but then weighed it and said it only weighed 25.9 grams rather than 26.7 grams.i still sent it off for grading which takes two months. what do you think still could be real or… Read more »

I have a lot of silver dollars I purchased from a man who was getting rid of his collection. Several have turned dark. There is no wear on them and you can read everything easily. Someone told me that cuts the price in half. Is that true? These are old morgan and peace silver dollars.

I have just purchased a beautiful 1880 gold toned (both sides) morgan on a popular web auction site. I know little about coin (silver) toning and want to know how the coin can be completely gold toned or has it been gold plated?
anyone with knowledge please email me. thanks.

I just looked at my 2017 BU 1oz silver dollar thats been in its cardboard coin holder an inside the shipping envelope in a drawer since I bought it months ago an noticed that the front of it is starting to get like a rose colored streak across it.

Gotta put them in air tights discs. That cardboard is not air tight. Sometimes the plastic sticks harder to one side and you get one side toned.

I stored new coins in green felt in a safe and they started to tone immediately. The ones that were in plastic money bags still look like new. Lesson learned.

While cleaning a 1968 JFK half dollar (40% silver) with warm water and dish soap the coin completely toned GOLD in front of my eyes. Has anyone experienced anything similar?

I have a 1943 quarter that appears to be made of copper, but tiny chips look like it is still silver below the coating. Is it simply corroded or did someone possibly alter it by dipping it in something or heating it up?

I have a 1961 penny that has a brilliant shine and it has some light purple a little red but it’s the brightness of the coin. I’ve seen none that compares. As far as I know it’s never been cleaned

I have 1994 P Quarter that has a yellowish gold petina. Could someone please give me more info on why it is discolored.

I have found a 2000 p mm.Maryland quarter and it seems to have a light transparent bluing effect. It’s definitely not an ugly (if you will) coin it’s actually very appealing to the eye. I like the bluish /grayish color and the quarter looks as if it could receive a ms 67 grade.

Hi there. Just wondered if anyone knows what would cause these mark on a UK 50p piece? Its is not visable in direct light, onlybwhen you turn the coin away. Just wondered if it was caused by a chemical or made during the minting process. Thank you in advance for your comments.