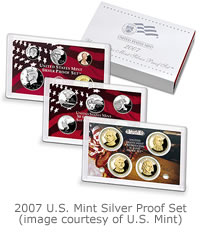 As of last week, the mint reported slightly over 650,000 units sold of those so far. It’ll be interesting to see how the silver series goes. It’s not much of a barometer but the 2006 clad proof set sold slightly over 2 million sets while the 2006 silver proof set sold, as of last week, a little over 1 million. Or, the 2006 clad had about a 2 to 1 advantage of the 2006 silver sets. That’s interesting, but maybe that’s as far as it goes…

But wait… What is a proof set? An "official definition" from the mint’s sales site:

"United States proof coins are extraordinarily brilliant, with sharp relief and a mirror-like background. Their frosted, sculpted foregrounds give them a special cameo effect. Proof blanks are specially treated, polished and cleaned to ensure high quality strikes. The blanks are then fed into presses fitted with hand-polished dies and struck at least twice to ensure sharp relief. The coins are then packaged in presentation cases to showcase and maintain their exceptional finish."

Like the clad proof set, the silver proof set includes the following 14 coins:

That’s four extra coins over previous years because of the addition of the new presidential $1 coins honoring the past Presidents of the United States. Also like the clad proofs, each coin has the "S" mint mark. That denotes they were made at the United States Mint in San Francisco. However, unlike the clad set, the following coins in this just released proof set are composed of 90% silver:

Sorry, these are annual sets so the U.S. Mint has no official release ceremony, like they recently did with new Presidential Jefferson $1 Coin. What’s the price tag of the proofs? You can order the silver set online for $44.95 (plus shipping and handling). There are no order limits. So get yours today!

Are you able to tell me the total weight of SILVER contained in U.S. Mint proof sets? I believe I read somewhere that it is in the neighborhood of one and one-third ounces, but I wanted to be entirely accurate if possible.

The silver content for newer sets may be found at http://www.coinnews.net/tools/us-mint-silver-coin-price-guide/.