Collecting Coins Joy from a Jar of Pennies

Coin collectors often bring the joy of their hobby to children. My own father was a collector. During my childhood, I remember sitting at the kitchen table going through what seemed like buckets of pennies. The pennies didn’t just come from saved pocket

change… My dad would often make trips to the bank and buy rolls and rolls of coins. The pennies would end up in a large container and we kids would go through them all, separating out the “chosen ones”.

I’m sure we snagged interesting specimens but the ones I remember most were Wheat Cents. Those were automatically added to the good pile. I was firmly set upon finding more Wheat nuggets before anyone else. While in my competive haze, I expect my dad went through the good pile, finding key dates and quality grades to complete his penny collection. After the nightly treasure hunt, we all became “coin counters”, getting pennies into roles for their return to the bank and Wheat Cents into pickling jars for storage. 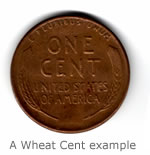 Coming forward to present day, I’m now curious about the value of those non-key, Wheat Cent filled jars. How many pennies DO fit into a 32 oz jar?

I fought the urge to call home to have someone open and count from one of those still remaining jars of Wheat Cents. (Okay, I called but no one answered…)

In desperation for a quick, curiosity-driven and hardly scientific answer, I Googled the question… The answer? Approximately 1200 pennies seems to the magical quantity for filling a 32oz jar. How much are they worth, you ask?

In today’s coin market, you’ll pay approximately 7 cents for an average circulated Wheat Cent. So a pickle jar filled with Wheat Cents is worth approximately $84! Not bad, considering the pennies were purchased at face value of about $12 and, more importantly, starting a family down the patch of coin collecting.

But for this child, the real joy in those jars of pennies are the memories!

Mike – Great story. I started collecting pennies back in the 50’s. I lived in California at the time and Disneyland was NEW! As a souvenir I got my first coin album. Dark brown with gold letters. It was the multi-fold type where you could only see one side of the coin. I’ve still got it. Through my collecting, my Dad got the bug. NOW in his late 80’s, he’s getting his great grandkids started with the state quarter sets. I can remember getting a “birthday check” from MY grandma and going to the bank to get bags of change.… Read more »