In addition, there will be four U.S. coin sessions and one U.S. currency session. Lot viewing will be conducted by appointment at the firm's Irvine, California, headquarters October 27-November 2, at the firm's New York office November 8-11, and onsite at the Baltimore Convention Center November 14-18.

The auction will be held at the Baltimore Convention Center beginning Tuesday, November 15, concluding Saturday, November 19 [...]

The name of the Teich Family now joins the illustrious ranks of "name" collections, as Stack's Bowers Galleries prepares the first in a series of major offerings from the Teich holdings. This old-time family collection has been in private vaults since the 1950s, and has already caused worldwide excitement in the selected previews Stack's Bowers has hosted at several numismatic shows this year [...]

On September 14-16, Stack's Bowers Galleries conducted its annual Americana Sale in Philadelphia as the Official Auctioneer of the Whitman Coin and Collectibles Philadelphia Expo.

The sale featured over 4,000 lots of U.S. medals and tokens, colonial and federal U.S. coins, and U.S. paper money, offering something for every U.S. collector. At the end of the auction, $4,480,136 and thousands of numismatic items changed hands [...]

Stack's Bowers Galleries proved the current strength of the coin and currency market last week by realizing an astounding $40,084,165 at the Official Auction of the ANA World's Fair of Money, with U.S. coins realizing over $29.9 million of the total.

The only official ANA auction in Chicago presented more than 9,000 lots of U.S. and world coins, paper money, medals and tokens over 11 sessions, August 13-20, 2011, at the Donald E. Stephens Convention Center in Rosemont, Illinois, a suburb of Chicago [...] 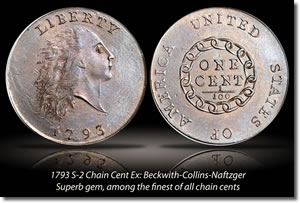 The number one-ranked collection of United States large cents in both the PGCS and NGC Set Registry listings will be publicly displayed in Chicago at the American Numismatic Association World's Fair of Money, August 16 - 20, 2011.

The historic coins from the Cardinal Collection Educational Foundation include some of the finest known examples of large cents struck from 1793 to 1857, as well as 18th century colonial coppers, and small cents struck from 1857 to the present day.

The foundation's exhibit is co-sponsored by Stack's Bowers Galleries and Collateral Finance Corporation, and will be displayed at the Stack's Bowers booths, #805 & #906, during the five-day show [...]

With great pleasure Stack's Bowers Galleries will be offering at the World's Fair of Money one of the very few United States rarities listed in the Guide Book of United States Coins that has never before sold at public auction.

The focus will be on one of just two examples known to us of the 1975-S Proof Roosevelt dime lacking the S mintmark. The presently offered coin was purchased in February 1979 by dealer Fred Vollmer, a professional who specialized in Proof coins and sets and appreciated the unique opportunity [...]