It's been a brisk couple of weeks for newly introduced or passed coin legislation. Five US coin bills have seen recent movement, and two...
Read more
Coin & Numismatic News 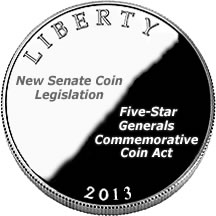 Senator Pat Roberts of Kansas introduced coin legislation to honor five-star Generals and the United States Army Command and General Staff College (CGSC) for its service in educating the nation's military leaders since its founding in 1881.

The 50 cent clad, $1 silver and $5 gold coins would portray Five-Star Generals George Marshall, Douglas MacArthur, Dwight Eisenhower, Henry "Hap" Arnold, and Omar Bradley — each alumni of the CGSC, which was founded in 1881 at Ft. Leavenworth, Kansas.