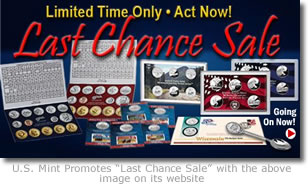 The United States Mint's last chance coin clearance sale kicked off early Saturday morning with a massive list of over 150 old and new coins and products.

The Mint announced its sale Monday along with plans to slash coins from its 2009 numismatic portfolio, including 22 American Buffalo and American Eagle gold and platinum collector coins.

The Mint has dubbed its limited-time, first come, first serve offer as the "Last Chance Sale." The sale continues through to December 19 and includes coins and product dating between 1999-2008. The Mint has said old inventory not sold will be melted shortly after, which will ease its January transition to a new fulfillment center in Plainfield, IN.

Will Some Hawaii Coins be Valuable?

State Quarters: How Popular are They?

The mass media many times tends to focus on topics that are popular and will catch the viewer or reader's eye. The U.S. Mint...
Read more
Coin & Numismatic News

2008 Quarter Designs and Pictures Released: The Last of the Commemorative State Quarters

Today, November 27, the United States Mint released pictures of how the last state commemorative quarters will look. 2008 is the final year...
Read more