In 1986 the United States Mint began striking new silver and gold annual coins. Representing the silver side are American Silver Eagles. Through to the middle of 2010, the mintage total for the silver dollars is over 230 million coins.

That’s a pittance contrasted against the mintages of daily circulating coins. The total doesn’t even match the U.S. Mint’s output of a couple week’s worth of pennies in some years. However, such an analogy doesn’t pass the muster of comparing apples to apples. 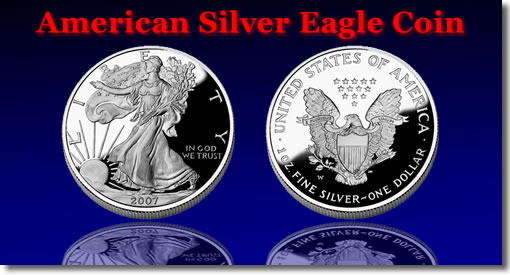 While you’re more than likely very familiar with the US penny, let’s explore the American Eagle Silver coin to discover what’s really so different about it. We’ll summarize the following subjects that are also hot linked enabling you to quickly jump to each:

The design of the American Eagle Silver 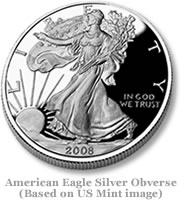 The American Eagle Silver coin’s heads or obverse bears the Walking Liberty half dollar design that was used between 1916 through 1947 and created by Adolph A. Weinman (1870-1952). The United States Mint describes the obverse features as:

"… an ever hopeful Lady Liberty striding confidently toward the sunrise, draped in the strength of the Stars and Stripes carrying in her arms branches of laurel and oak to symbolize both civil and military glory."

After a close inspection, you’ll notice Weinman’s initials on the hem of Lady Liberty’s gown. The obverse will also have the inscriptions bearing: 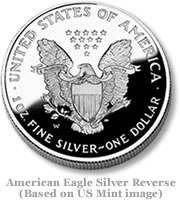 The coin’s designation within the "American Eagle" coin family hints at its tails or reverse design. You’ve already seen at least the image of the Silver American Eagle’s reverse to know it portrays an eagle.

That design was created by United States Mint sculptor-engraver John M. Mercanti and portrays a heraldic eagle with a shield. The eagle has arrows in the right talon and an olive branch in its left.

The reverse of the American Silver Eagle has the inscriptions:

While the Silver Eagle coins are a relatively young series, keeping track of where they were minted, knowing the available mint marks, and understanding the coin finishes and types can get confusing. In the early years of the Silver Eagles, things were clearer. You could buy them as either:

(If you’re unfamiliar with these terms, you may be interesting in the article, What Are Proof Coins? What Should You Know About Them?)

Bullion coins are those struck with the intent being vehicles for investment. They do not have the special collector proof or uncirculated finishes, nor carry mint marks. The Mint does not sell these coins directly to the public, but instead through a network of authorized dealers who resells them for a small premium over the current spot price of their precious metal content.

Proof coins were issued specifically for coin collectors and, like all proofs, were and are available for direct purchase from the Mint but only during the current year of the coin’s mintage.

Uncirculated coins couldn’t be purchased from the U.S. Mint in earlier years. Special satin finish versions were made available beginning in 2006.

" … In a process similar to that used to create the magnificent American Eagle Proof Coins, American Eagle Uncirculated Coins are hand-loaded into the coining press, struck on specially burnished blanks and carry the “W” mint mark of the United States Mint at West Point."

In the same year (2006), as part of the 20th anniversary celebration of the American Eagle Silver coins, the Mint also released a special reverse proof from the Philadelphia Mint. However, this coin could only be purchased through a limited mintage anniversary 3-coin set, which also included the standard Proof coin and the new "W" Burnished Uncirculated coin.

While the reverse proof was only offered in 2006, the "W" Burnished Uncirculated coins continue as a new annual offerings and are sold each year by the Mint. 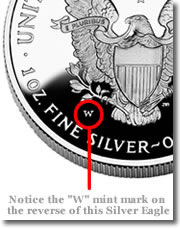 From 1986-1992, American Silver Eagle Proofs were minted at the San Francisco facility and included the "S" mint mark. From 1993 through 2000, they were produced in Philadelphia and held the "P" mint mark. Since 2001, Proof Silver Eagles have been minted in West Point and have the "W" mint mark

Outside the Burnished Uncirculated coins which have a "W" mint mark, all Uncirculated American Eagle Silver coins have never had a mint mark.

From 1986-1988, Uncirculated Silver Eagles were minted at the Philadelphia facility. From 1999-2000, they were produced in both Philadelphia and West Point. (Since the coins have no mint mark, there’s no way to track where they originated.)

Since 2001, the Uncirculated Proof Silver Eagles have been produced solely at West Point. Again, with no mintmark.

Rare coin created in the 10th Anniversary of American Eagles

Another interesting year for the Silver American Eagles was 1995. That was the year the Mint released the first special limited edition set. In this case, it was a 1995-W Silver Proof American Eagle and it was only available through a special 5-coin proof anniversary set that honored American Eagle bullion coinage.

The other coins in the set included the one-ounce, half-ounce, quarter-ounce and tenth-ounce American Eagle Gold coins for a total price of $999 for each of the 30,125 sets minted. The price tag was steep for Silver Eagle collectors, and many took the gamble and waited for the coins to get broken out and appear separately in the secondary market.

Given the limited mintage and high demand, the 1995-W Silver Eagle soon sold by itself for over a thousand dollars. The price continued to escalate and now you’re likely to spend upwards of $5,000 for the single coin itself. 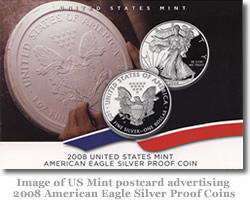 It’s important to point out that these coins and the standard Uncirculated coins are also available from a variety of coin shops, dealers and online auctions. Normally, unless you’re buying in volume, you’re likely to find the best price for current year coins through the United States Mint.

It’s a good idea to subscribe to the Mint’s e-mail or mailing list. They’re generally activate in marketing their latest offerings. For example, the Mint sent an e-mail and delivered postcard announcements reminding subscribers in 2008 that the American Eagle Silver Proof coin would be available for $31.95, plus shipping and handling.

Of course, sites like CoinNews are also consistent in bringing attention to new mint offerings with information and direct links on where to buy. Visiting the Mint’s information page for eagles can keep you up to date as well. However, be prepared to click around to find exactly what you’re wanting because the Mint’s product offerings are on the rise and, therefore, more confusing to track down. If you know exactly what you want, sometimes it’s quicker to order by calling their toll-free number, 1-800-USA-MINT (872-6468).

While slightly on the technical side, facets of the Silver Eagle coin specifications are interesting:

When and where did American Eagles originate?

The Liberty Coin Act became Public Law: 99-61 on July 9, 1985 made it all happen. It amended Federal law to direct the Secretary of Treasury, through the US Mint, to issue one dollar silver bullion coins of a specific size, weight, design and quantities to meet public demand.

Since the Internet as we know it today wasn’t readily available in 1985, the full transcript of the law is difficult, if not impossible, to track down online.

This table shows the various prices the Mint has charged for each year’s coin.

Here are mintages numbers provided through the US Mint and the Red Book. For always up to date figures, see:

*Official mintage figures not yet released.