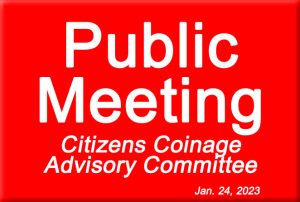 In addition to U.S. coinage, the United States Mint strikes national medals like Congressional gold medals. The U.S. Mint also produces duplicates of them in bronze. Public Law 117-38 authorized the Mint to sell Harlem Hellfighters Bronze Gold Medals to the public at prices "sufficient" to cover their costs.

For members of the public, this meeting is for "listen purposes only" — no comments or questions will be taken, and phones must be muted. Instead, those wanting to offer matters for the CCAC’s consideration are invited to submit them by email to info@ccac.gov.

Get your bronze duplicate version of this Congressional Gold Medal for only $160!

You’ll get no argument from me, Antonio; rather, a very resounding “I second that!”