Gold and silver advanced on Friday, padding their weekly gains. Both metals finished the day at nearly 9-month highs.

"That gold prices are rallying after an on-consensus CPI [Consumer Price Index] for which the market was well positioned for highlights that there’s another source of buying activity in gold markets," Reuters quoted Daniel Ghali, commodity strategist at TD Securities, attributing it to central banks and non-central bank government agencies.

On Thursday, the U.S. Labor Department reported that consumer prices fell 0.1% in December after rising 0.1% in November, resulting in year-on-year inflation easing to 6.5% from 7.1%.

Gold prices jumped 2.8% this week. The yellow metal has now booked four consecutive weekly increases and is 5.2% higher on the year to date.

"This week, 18 Wall Street analysts participated in the Kitco News Gold Survey. Among the participants, 11 analysts, or 61%, were bullish on gold in the near term. At the same time, three analysts, or 17%, were bearish for next week and four analysts, or 22%, saw prices trading sideways.

Ending higher for a second day after falling for three straight, silver for March delivery rose 36.8 cents, or 1.5%, to settle at $24.372 an ounce. The settlement was the highest since April 21 when silver finished at $24.621 an ounce. Silver prices increased 1.6% this week after slipping 0.2% last week. They are 1.4% higher on the year.

The pair is lower on the year so far with losses of 1% for platinum and 0.6% for palladium.

Published United States Mint bullion sales increased this week for the first time since the one ending Dec. 30. Advances included a combined:

Nice close for gold. We’ll see how long that lasts as people sell on Monday.

Gold finished at $207 an ounce higher than palladium; this trend seems to have no end.

Originally it was platinum that bit the dust as far as its status of being a more valuable precious metal than gold and now it is beginning to appear as though ordinarily high flying palladium might in fact be embarked on a somewhat similar trajectory.

I would compare him to Mozart, as both reached incredible heights before dying young.

Sir Kaiser, today you can purchase the Dr. Martin Luther King, Jr. and Coretta Scott King Bronze Medal from the US Mint priced at $160 for the 3-inch diameter medal and $20 for the 1.5-inch medal. When these medals were initially released and sold by the Mint in June, 2014, they were priced at $39.95 for the 3-inch medal with the 1.5-inch version selling for $6.95. Tempus fugit. 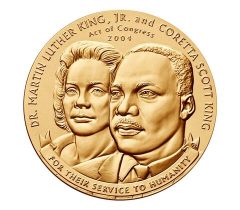 That is still, Good Sir Rich, at least for my money (pun most certainly intended), the single most egregious, outrageous and above all astonishing price increase I have had the misfortune to encounter in the history of my dealings with the U.S. Mint.

Did you see in the public law (Funding and Proceeds of Sale) an amount not to exceed $30,000? It wouldn’t take too many medals at those prices to reach $30,000. I highly suspect that no one is counting.

If they are counting, Major D, they aren’t talking. Perhaps this is one of those items that comes under the Mint’s “Silence is Golden” rule.

A bronze duplicate of the single gold medal struck and awarded per Public Law 108-368 Oct 25, 2004. No strike date, no mint mark, no product limit, no mintage. E:\PUBLAW\PUBL368.108 (congress.gov) SEC. 3. DUPLICATE MEDALS. The Secretary of the Treasury shall strike and sell duplicates in bronze of the gold medal struck pursuant to section 2, under such regulations as the Secretary may prescribe, at a price sufficient to cover the costs of the duplicate medals and the gold medal (including labor, materials, dies, use of machinery, and overhead expenses) SEC. 5. FUNDING AND PROCEEDS OF SALE. (a) AUTHORIZATION.—There is… Read more »

Pretty clear as to what that says, but as happens so many times with gummint affairs what is said and what is done are not the same, contrary to what Yul Brynner as the Pharoah decreed in “The Ten Commandments”.

“So let it be written; so let it be done.” …and woe to anyone who did not obey the edict or deliver on their commitments.

Good Sir Rich, when I was in the Fourth Grade in 1956 I happened to see that as a first run film at the Seventh Army’s Patch Barracks Base Movie Theater in Stuttgart-Vaihingen, West Germany. To this day I recall how many of the girls in the audience couldn’t help but cry at the more emotional parts. Oh dear.

The Pyramid of Power…

Incidentally, Good Sir Rich, an alternative and slightly grittier motto for the Seventh Army patch was “Seven Steps To Hell”.

Received an email today from the Mint about buying these medals as a way to celebrate MLK. Cynically, I think it’s a way for the Mint to make money on his legacy- as I’ll bet the Mint has already recouped the initial funding cost to strike the one gold medal that was authorized in 2004 and awarded posthumously.

I received that email also, Major D, and I spent a few minutes washing the cynicism off my hands after touching my keyboard clicking on the Mint’s link.

I must be favored, I didn’t receive this email.

The spirit of the Pharoah Yul Brynner interceded for you. So it was written, so it was done. Nice to have friends in high places.