Struck at the U.S. Mint’s facility in West Point, New York, and limited to a mintage of 9,000 pieces, the uncirculated coin may be poised for a relatively quick sell out as that happened with the prior two issues.

Bullion and proof versions of American Gold Eagles debuted as annual issues in 1986. The uncirculated edition joined them in 2006. All depicted the same basic imagery until 2021 when the U.S. Mint updated the obverse (heads side) and replaced the reverse (tails side).

Obverses bear one of the most popular designs to have ever graced American coinage — Augustus Saint-Gaudens’ full-length figure of Liberty. This likeness was first seen on 1907-1933 $20 gold coins.

It reappeared in 1986 on American Gold Eagles and basically remained unchanged until 2021 when legacy design elements, like the Capitol Building, stars, torch, and sun rays, were restored using the original bronze cast. Obverse inscriptions include "LIBERTY" and "2022."

As for the series’ original reverse design, it was completely replaced last year. Gone is Miley Busiek’s family of eagles design. The new image, instead, depicts the head of an Eagle as created by Jennie Norris and sculpted by Renata Gordon.

Anti-counterfeit measures were also added in 2021, including a reeded edge variation, which is also on this year’s coin.

Orders are limited to one coin per household during the first 24-hour sales period.

Pricing is $2,670.00. That is subject to change weekly based on a matrix the U.S. Mint uses that ties its gold coin prices to market conditions.

Placed order received the email that my order was received at 10:01am MST

Received an email notice, not paying $400 above bullion price for this one. A pass for me. How much gold do I need anyway? I buy silver because it’s more affordable.

I sure would like to live long enough to see silver take off. Instead, it seems to be the only “precious” metal that is inflation and recession proof in that the scrap value always stays within a small, limited price range no matter where other commodities seem to be at– which is not to say the Mint doesn’t inflate value way over spot anyways as we all know their prices are crazy high. Will we see $7/gallon gas and $100 pre-sale ASE proofs before silver gets to $28/oz?

Incredible- I see that California and Nevada are already there with $7/gallon gas.

The East Coast isn’t all that far behind, Major D. I find that this new circumstance does make me want to drive a lot less.

Every time I think about how nice it would be if the value of silver exploded so that this precious metal could join its brethren in the stratosphere, I bring myself back to earth with the realization of what that would mean for new silver coin pricing. Ouch!

Kaiser, although a distant second to gold, silver sure does make for some excellent coins. I recently acquired some 1964 Kennedy half-dollar proofs with accented hair, and they look stunning.

You’ll get no argument from me in that regard, Major D. I’ve always thought that the design presentation capability of silver is superior to that of gold. Those ’64 silver Kennedy Halves must be amazing!

They sure look like beautiful coins– but out of my reach 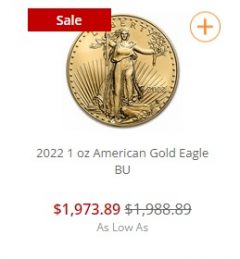 Even at $1,973 the one ounce bullion seems a bit high. But it is an eagle and easily sold. Small demand for this 2022 US Mint W burnished eagle. I don’t see it appreciating much in the future. Hopefully, it will.

Beautiful coins. Absolutely easily sold. Proof or BU. Priced lower, I’d add this one. But at these listed prices? Compared to spot? Can’t.

I do enjoy looking at the fine depictions of these striking coins, and due to their price I content myself with that form of appreciation. I think I am doing better at living with the idea that not every coin that is beautiful has to be possessed.

I’m with you 100% on that sentiment. I’m a big fan of any kind of coin specimen and have focused on finding gem nickels of late- which are just as beautiful to behold in my humble opinion- and much easier to acquire.

It appears we’ve come to a similar conclusion, Major D, which is that appreciation from afar is at least as important and significant as personal acquisition.

rare to see it over this side of the Pacific, and it would sit well next to the 2017 and 2019 high reliefs coins. 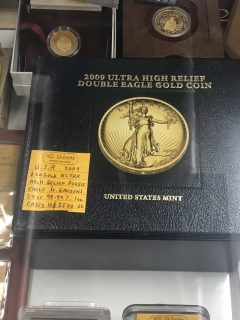 For my money (which it clearly isn’t), Daniel, this is one of those “if you like it enough and if you can readily spare the cash then by all means go for it” situations.

Hi Daniel, I am a big fan of that coin. It is the only gold coin I own. Around the time it was released, I was thinking everyone should own at least a little gold. When I saw the news about the mint deciding to release this one, I decided that would be the gold coin I would get. I liked that it was a one time thing. No series I would have to continue buying yearly (something I would have trouble affording). I believe it will continue to increase in value over time. It is an attractive coin, in… Read more »

Jeff, indeed, the 2009 Saint-Gaudens Ultra High Relief gold $20 double eagle was a big success for the US Mint. The coins first went on sale the week of Jan. 22, 2009, at an issue price of $1,189. The price of gold was $860 an ounce then, meaning that the coins were initially selling for a 38 percent premium to their gold content. The final mintage of 115,178 coins was well-distributed among collectors.

Merely speculating here, but I can’t help but wonder how considerable a level of sales enthusiasm an Enhanced Reverse Proof version complete with a decidedly lower mintage number that particular coin would generate.

Hi Rich,
Thanks for the accurate info, better than my memory. I dug up my receipt after I saw your comment, that $1189 was what I paid. I really like this coin. I am really glad I decided to purchase it.

It is an ultra high relief after all. That makes a difference.

CoinNews.net - July 1, 2022 0
Looking to buy gold and silver, "Oliver," an investor in Texas, responded to advertisements on Facebook from two companies that touted exceptionally low "introductory...