Fans of Western Americana turned out in droves for Holabird’s massive, four-day Western Trails & Treasures Premier Auction, held February 24th thru 27th, online and live in the gallery located at 3555 Airway Drive in Reno. Nearly 2,500 lots crossed the auction block in a wide array of categories, at price points that appealed to novice collectors and seasoned veterans.

Online bidding was facilitated by iCollector.com, LiveAuctioneers.com, Invaluable.com and Auctionzip.com. Following are highlights from the auction. Prices include the buyer’s premium.

Day 1 highlights included a lot of five publications relating to Philippines travel ephemera, all from the first half of the 20th century, an example being a rare official program for the Philippine Carnival held in Manila in 1910, 80 pages ($10,938); and an archive of about 400 photographs of San Francisco and the Northern Redwood Corridor, taken circa 1932-1935 by photographer Russell William Angel, including many shots of California’s majestic redwood trees ($3,000).

Also sold on Day 1 was a rare and large Staffordshire blue and white ironstone transfer foot bath and pitcher set made by an unknown craftsman, the pitcher 13 ½ inches tall ($2,625); a group of six antique bitters bottles, from various locales, to include Philadelphia, South Redding (Mass.), Richmond (Va.) and Toronto, Canada ($875); and an Independent Oil ceramic enameled sign in red, white and black ("From Coast to Coast – Independent Oil") with each side 27 inches ($875).

Day 2, on Friday, February 25th, was a busy one, featuring stocks and bonds (in the categories of mining, railroad, transportation and miscellaneous); and numismatics (to include currency, scrip and ephemera; ingots and bullion; coins, medals and tokens). More than 625 lots were offered.

Day 2 star lots included a San Francisco Mint silver ingot, .999 fine, weighing 6.61 oz. and showing the old style, pre-World War II logo of the Mint of San Francisco ($7,230); a men’s ring of one troy ounce of solid 14kt gold carefully holding a 1/3 Stater gold coin from the 6th century BC, one of the first of all world gold coins ($3,250); and a rare Hudson Bay Company 1820 one-pound sterling certificate, issued at York Factory and signed by two officials ($1,000).

Silver ingots, in addition to the one described, were popular with bidders. Examples included:

Top lots included a copy of Brown & Dallison’s Nevada, Grass Valley and Rough and Ready Directory (Calif.), 133 pages, with ads, compiled by Nat P. Brown and John K. Dallison, San Francisco ($5,375); a rare 1853 copy of Hale and Emory’s Marysville City (Calif.) Directory with residents alphabetically listed by occupations and addresses, plus businesses ($9,150); and the original Placerville (Calif.) Directory of 1862 by Thomas Fitch, printed by the Placerville Republican, 128 pages, with a soft-cover reprint by the El Dorado County Museum ($5,125).

One of only two known Nevada directories from 1868-69, a database of over 4,000 settlers, with addresses and often occupations, found a new owner for $3,416; an authentic ore car for Caird Engineering Works, about 3 ½ feet tall, 4 feet long and 2 feet wide, with the end dump, switches and wheels all in working condition, went for $3,375; and a Confederate D guard short saber Bowie knife, 22 ½ inches long with a 17 ¼ inch blade, the maker unknown, garnered $2,625.

The auction’s final day, Sunday, February 27th, featured art, Native Americana, transportation (railroad and steamer passes, ephemera and artifacts); plus many bargain and dealer specials that included general Americana, stocks and bonds and numismatics — a total of 625 lots on Day 4.

Art was led by a classic oil on canvas Western cowboy hunting scene by F. W. Trautwein, titled on the frame Meat’s Not Meat Til It’s In The Pan (1972), depicting a cowboy who’s just shot a mountain sheep ($1,875). Nothing could be found regarding F.W. Trautwein, or anyone of a similar name in Falk. But the quality of skill in artisanship of the horses and man was excellent.

A Hudson River Line steamer pass, no. 1206, with a maroon title and lovely vignette of a paddle steamer that fills almost the entire upper half, issued for 1898 to B.P. Holland of the Norfolk, Virginia Beach & Southern Railroad, brought $1,375; while a Utah Central Railway annual pass for 1885, issued to W. H. Hurlburt and signed by Mormon leader and important Utah figure John Sharp (as superintendent), made $1,312. The Utah Central connected Salt Lake City with Ogden.

Holabird Western Americana Collections, LLC is always seeking new and major collections to bring to market. It prides itself as being a major source for selling Americana at the best prices obtainable, having sold more than any other similar company in the past decade alone. The firm will have its entire sales database online soon, at no cost — nearly 200,000 lots sold since 2014.

To consign a single piece or a collection, you may call Fred Holabird at 775-851-1859 or 844-492-2766; or, you can send an e-mail to. To learn more about Holabird Western Americana Collections, LLC, please visit www.holabirdamericana.com. Updates posted frequently.

This is a verging on the bewildering array of historic artifacts. An auction for experts only. 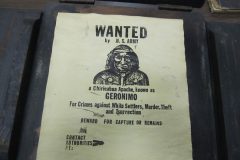