From a line of precious metal coins dating back to 1997, the United States Mint introduced a new themed-series with today’s release of the 2021-W First Amendment to the United States Constitution Platinum Proof Coin — Freedom of Religion.

Like previous strikes from the program of proof American Platinum Eagles, each 1-ounce coin is 99.95% platinum with a $100 face value.

The new product is the first in a five-year series continuing through 2025 with obverse (heads side) designs reflecting the five freedoms in the First Amendment to the United States Constitution — Freedom of Religion, Freedom of Speech, Freedom of the Press, Freedom to Peaceably Assemble, and Freedom to Petition the Government for a Redress of Grievances.

"This series uses the lifecycle of the oak tree from seedling to a mighty oak as a metaphor for our country’s growth as a nation that values freedom," the Mint describes. "Liberty grows to a thing of strength and beauty from a seed — our Bill of Rights. Each of the freedoms enumerated in the First Amendment contributes to the growth and development of the Nation."

Specifically, obverses for the five-coins depict:

All five designs were created by Artistic Infusion Program (AIP) Designer Donna Weaver and sculpted by U.S. Mint Chief Engraver Joseph Menna. Also inscribed on the images are "IN GOD WE TRUST," "E PLURIBUS UNUM," and their year of minting, for example "2021" for this year’s issue.

Unique designs have had a history with proof American Platinum Eagles. Prior-year issues have showcased various themes like "Vistas of Liberty" and "Foundations of Democracy." The three most recent program coins centered on the "Preamble to the Constitution" with the 2018 "Life" coin, the 2019 "Liberty" coin and the 2020 "Pursuit of Happiness" coin.

The 2021-2025 platinum coins share the same reverse (tails side) design as the just mentioned 2018-2020 themed series, depicting an eagle in flight with an olive branch in its talons.

Proof American Platinum Eagles are produced at the U.S. Mint’s facility in West Point. As such, the West Point’s mintmark of "W" is also found on the reverse.

The 2021 First Amendment to the United States Constitution Platinum Proof Coin — Freedom of Religion may be ordered directly from the Mint’s catalog of platinum coins.

Mintage is limited to 15,000 with an initial household order limit of 1 coin.

So how many were sold yesterday?

A better question would be how many have you bought? HHOL is one for 24 hours I believe.

I did by one. Seems there are about 7000 addicted collectors out there that quickly buy one, and the the sales languish until the remaining stock is depleted. Just saw on the mint website that just under 5000 have sold in the first week. A slow year, to be sure, but this may end up being a low production year for that reason, unless they already made all $15k, which means they will be selling this one for years to come.

Good for you! Yes, however this coin is a part of a bigger set than the last series. Some people apparently I guess may not have the funds needed to make a purchase today but may in the future. I understand keeping something available so people have a chance to collect the complete set. I firmly believe the set mintage for the V75 should have been pre order but some wizard wanted a cool date matching mintage limit, genius only government can buy… Now to be honest I have no idea where the price of platinum goes but I bought… Read more »

Also I was told I was immature for my age. I thought I resent that, yet I said thank you I resemble that! They were appalled. Lol

Also I think it’s cool I can watch my collection grow, artistically is an added bonus. Talk about a tight landscape.

Yes, V75 eagle sale was disappointing, but I did get a silver eagle V75 after wrestling 30 minutes with the overloaded US Mint webpage. I also have bought up a bunch of Pt eagles over the past years as the price dropped. Platinum is a great metal (10% heavier than gold and almost twice as heavy as palladium), and its price being much lower than gold or palladium is a great reason to stock up. The price seems to be heading upward now, and I see the intro price on the new Pt eagle is now up $50. because of… Read more »

Dont go crazy. I’m spending disposable income on my sets. Make sure you budget, and you have a good legal job to support your coin collection. Coin looks good to me! 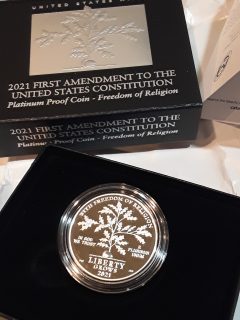 This is a really nice coin