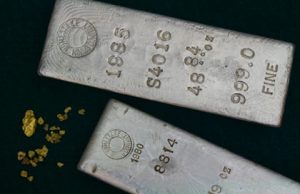 Gold prices ended lower for a fifth consecutive session on Tuesday and marked another seven-week low.

"With gold’s strong first quarter, it appears that there is some short-term profit taking going on," MarketWatch quoted Richard Gotterer, managing director and senior financial advisor at Wescott Financial Advisory Group. But "several scenarios could easily bring a new ‘pop’ to gold prices," he said, including escalations in the relations between North and South Korea, Russia and Crimea.

"The near-term sentiment for gold appears negative," Howard Wen, an analyst at HSBC Securities (USA) Inc., wrote in a note according to Bloomberg News. The metal’s recent decline "was largely explained by the combination of receding geopolitical tensions and the Fed’s guidance for higher interest rates."

Platinum and palladium each advanced 0.6%. In their breakdowns:

Sales totals for U.S. Mint bullion coins were unchanged as of 3:27 p.m. ET, though the bureau on Tuesday did raise totals for sales through to the end of March. Notably, bullion Silver Eagle sales went up another 878,000 for a March total of 5,354,000 — the fourth highest month ever and the strongest tally since January 2013’s all-time monthly record of 7,498,000 coins.

Below is a sales breakdown across U.S. Mint bullion products with columns offering the number of bullion coins sold last week, this week, last month and the year-to-date which is also the first quarter.