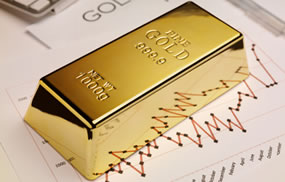 Gold advanced for a fifth straight session on Tuesday — the longest rally since August 2012 reports Bloomberg News, and closed at a more than three-month high.

"Yellen’s comments have been right down the middle of the road," MarketWatch quoted Brien Lundin, editor of Gold Newsletter, adding that "gold was already trading nicely higher before her testimony began, largely on the back of a weaker dollar and strong Chinese demand."

"Apparently all the gold market needed was an absence of damaging remarks from Yellen, as the price continued to strengthen as she talked," he said. "This indicates that underlying bullish posture for gold is strong."

"Acknowledgment by Yellen that more needs to be done to restore the labor market is helping gold," Frances Hudson, a strategist at Standard Life in Edinburgh, which oversees $294 billion said in a telephone interview according to Bloomberg News. "While she said that tapering will continue, she made it clear that it’s not on any pre-set course."

In PGM futures prices on Tuesday:

U.S. Mint bullion sales advanced on Tuesday for one-ounce coins in gold and silver. Below is a current sales breakdown across all United States Mint bullion products.

This article was updated to correctly indicate silver futures advancing for seven straight sessions instead six.