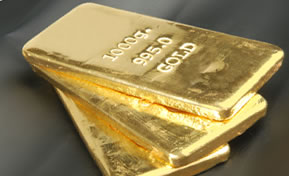 Gold fell slightly Wednesday but with a third straight day of losses prices have dropped 1.1% for the week.

"The U.S. dollar index was boosted following the ADP report and the FOMC minutes, hitting a fresh six-week high on Wednesday," said Jim Wyckoff, a senior analyst at Kitco Inc, in a daily note. "The stronger greenback and lower crude oil prices were bearish ‘outside market’ forces working against the precious metals markets on this day."

The ADP National Employment Report showed that payrolls increased by 238,000 in December, the strongest advance in 13 months and above the 200,000 figure news outlets pegged as economists’ expectations.

There have not been United State Mint bullion sales to report since Dec. 26, though orders for gold coins have been taken. The U.S. Mint on Jan. 2 began selling its 2014 American Eagle gold coins and 2014 American Buffalo gold coins. The Mint is yet to publish their starting sales. Below is a snapshot on how bullion coins performed in December and in 2013.