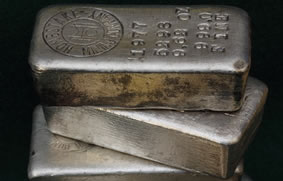 Gold closed lower Monday, albeit modestly, for the first time this year. Prices rebounded from a quick and unexpected early morning tumble which briefly halted trading.

"Gold prices ended the U.S. day session about where they began it — near unchanged levels. However, a sudden, big spike down in prices at mid-morning created yet another buzz in the market," said Jim Wyckoff, a senior analyst at Kitco Inc, in a daily note.

Wyckoff added: "The CME Group said an erroneous trade in Comex gold futures was not responsible for the February gold contract dropping sharply — by over $30.00 an ounce — in a very short period of time and briefly halting trading action at the Comex at mid-morning Monday. Reports said very heavy volume at the time of the price drop was recorded in gold futures — 4,000 contracts in one second’s time, which could have been a big ‘fund’ trader taking a long futures trade off the table."

Platinum and palladium, however, extended their winning streaks to four sessions. In their daily breakdowns:

There have not been United States Mint bullion sales to report for more than a week, though orders for gold coins have been taken. The U.S. Mint on Thursday, Jan. 2, began selling its 2014 American Eagle gold coins and 2014 American Buffalo gold coins. The bureau is yet to publish their starting sales, which are expected to be strong. Below is a snapshot on how bullion coins performed in December and in 2013.