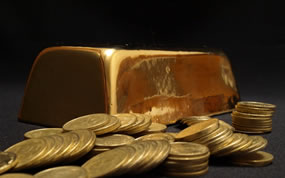 "For the time being, price moves will be exaggerated by the lack of liquidity … but in the absence of any fresh macro news, I don’t think we are going to break below $1,190 or above $1,225," Reuters quoted MKS SA head of trading Afshin Nabavi.

Gold prices last week rose 0.9% but they are poised for a more than 28% loss on the year.

Advances for the PGMs last week totaled 3.5% for platinum and 1.9% for palladium.

London precious metals fixings were mixed Monday with all but palladium lower. When comparing the London fix prices from Friday PM to Monday PM:

Listed below are United States Mint bullion sales for the month through Dec. 30, 2013 and the year-to-date.