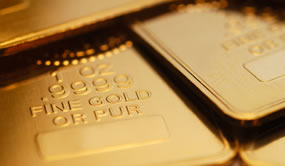 Gold turned lower Tuesday after rising slightly in the previous session. The precious metal has declined in three of the last four sessions.

"Gold prices ended the U.S. day session moderately lower Tuesday and gave up slight gains scored just after the futures market opened in New York," said Jim Wyckoff, a senior analyst at Kitco Inc, in a daily note. "The key ‘outside markets’ were bearish for the precious metals Tuesday, as the U.S. dollar index was higher and crude oil prices were lower."