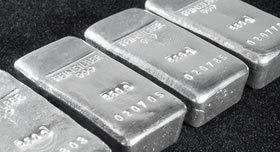 "The gold and silver markets are going through a period of higher volatility, having strongly advanced for two solid weeks, but generally they are benefiting from their safe-haven status and the trend is definitely higher," MarketWatch quoted Gene Arensberg, editor of the Got Gold Report.

Gold futures in the previous session surged $27.10, or 2%, to finish at their highest price since May 14.

In PGMs on Wednesday: