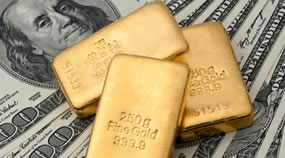 Gold and silver tumbled to nearly three-year lows Wednesday as investors focused on equities and the U.S. dollar climbed against other world currencies.

"The raft of figures that came out of the U.S. all pointed to a stronger growth pattern, which pushed the dollar higher," David Lennox, an analyst at Fat Prophets, said from Sydney, according to Bloomberg News. "That’s two nails in the coffin for gold: a stronger U.S. dollar and expectations that quantitative easing will be scaled back."

"We bought gold for two reasons — because we were worried about the inflationary impact of policy and because we thought the financial system was going to fall apart," Reuters quoted Sean Corrigan, chief investment strategist at Diapason Commodities Management. "Although it may be completely the wrong judgment, the market has decided that none of those at the moment is a concern," Corrigan said.

US Bullion Coin Sales in June

The following are daily, June and year-to-date bullion coin totals as provided by the United States Mint.

Good Luck All, time for me to hibernate until October….
ZZZzzzzzzzzzz…….

I never thought precious metal prices would drop below their production costs. Now, they have. I wonder how long this can last.