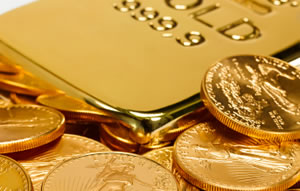 Gold felt pressure earlier in the day after the release of better-than-expected U.S. economic data — lower weekly jobless claims and a jump in U.S. housing starts.

"Good news on the U.S. economy will always be bad news for gold and silver bulls, as expectation of early withdrawal of [the third round of] quantitative easing … by the Federal Reserve increases," MarketWatch quoted Chintan Karnani, a billion analyst from New Delhi.

Aside from gold, precious metals in London advanced. In contrasting the latest London PM Fix prices:

Sales of US Mint Bullion Coins

Thursday was a strong sales day for U.S. Mint bullion coins. American Eagle gold coins advanced 8,500 ounces with all but the one-quarter ounce size gaining. The new January total across all sizes is 121,500 ounces.

American Eagle silver coins jumped 875,000 to 6,007,000 for the month. Today’s push resulted in a temporary sell out as their sales are now suspended until the Mint rebuilds an inventory. The U.S. Mint will begin taking orders again on Jan. 28, 2013 but in an allocated basis.

Coin sales figures shown above are in the number of coins sold. Calculate total ounces by using the bullion coin’s weight.