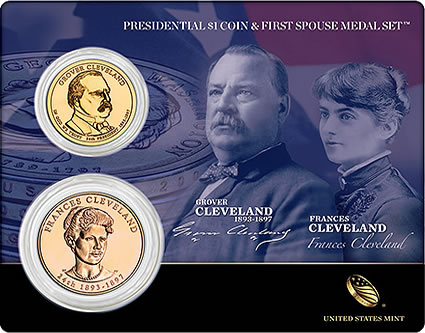 The Presidential $1 Coin is an uncirculated version of the Grover Cleveland $1 coins released on November 15, 2012 in bags, rolls and boxes. The 1 5/16-inch bronze medal has the same obverse and reverse designs as the 24-karat Frances Cleveland First Spouse Gold Coins that also debuted Thursday, Dec. 20, 2012.

A "durable plastic card" holds the coin and medal, as shown in the image above. This is the same card used for the first term set launched on Nov. 20, 2012. Its front has portraits and signatures of Frances and Grover Cleveland. Printed on the back is product information.

Pricing for the second term Cleveland Presidential $1 Coin & First Spouse Medal Set at $9.95 is the same as the three other sets released this year. Prior-year sets remain available as well. Those from 2011 cost $14.95 and those from 2010 cost $11.95. Sales have slowed for them overall. The latest sales figures follow.

*Sales are as of December 17, 2012. **Sales of the Presidential $1 Coin & First Spouse Medal Set for the couple’s first term are not available as the United States Mint is yet to report them.

The U.S. Mint is accepting orders for the sets through its website or at 1-800-USA-MINT (872-6468). There are no household ordering or product limits stated.