CoinNews CoinNews delivers the latest World and US coin news
Bullion Articles and Precious Metal Reports In The Lead – Brussels Sprouts A Resolution? Not Exactly. 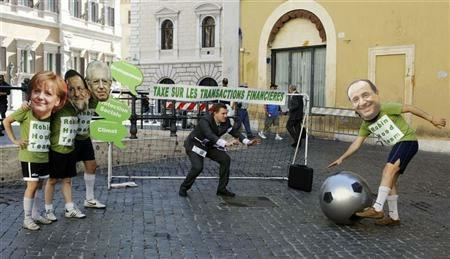 Serious price as well as psychological damage was incurred in the precious metals complex on Thursday as frustrated market participants got tired of waiting (as they ought to have) for the conclusion of the EU meeting and liquidated long positions en masse after sell-stops were touched during the late morning.

Spot gold cratered by over $28 to touch lows near $1,546 and to also close at the lowest level in futures since late May, while spot silver slid to but four pennies above $26 and broke the all-important support shelf at $26.58 per ounce.

Of course, Europe played a role in the "risk-off" kind of trading day that Thursday shaped up to be, and with news such as the deepening economic crisis in Italy, (once again) soaring Spanish and Italian bond yields, and lowered expectations for a crisis resolution out of the now 19th (!) summit of the EU leadership, there were plenty of justifications for such an attitude to rule the day. As regards the aforementioned expectations, they may have turned out correct; the late evening announcement that the EU has agreed to spend 120 billion euros to stimulate growth and to create jobs went over like a non-event in the after-hours markets. The debt debacle has devolved into Europe’s leaders being seen as playing more at this game of political grandstanding rather than some serious fiscal soccer;

Once the market adopted the bearish tilt on the day, no amount of mildly supportive news was able to right the listing ship. There was a mention of the fact that Germany could be softening its stance and might allow Italy and Spain to tap into the EFSF’s 440 billion euro kitty even though it remains staunchly opposed to the creation of a region-wide bond. There was at least one news story that Turkey is beefing up its Syrian border troops after it warned that the downing of one of its fighter jets will not go ‘unpunished.’ Neither story lifted the euro back above $1.25 or made for fresh gold safe-haven oriented purchases. The common currency is still being seen as reaching $1.20 against the buck inside of 90 days’ time. It finished at 82.72 on the trade-weighted index last night.

Market talk attributed some of the losses in precious metals as well as part of the Dow’s earlier (1.2%) losses to the surprise but huge victory that the US Supreme Court handed to President Obama with its affirmation of a key part of the administration’s health care overhaul.

"Individuals are perceived to have less to spend on other goods and services, and companies are less willing to take on additional projects, so you see industrial metals as well as gold and silver sell off," said Phillip Streible, senior commodities broker at futures brokerage R.J. O’Brien.

Bloomberg News’ survey of gold analysts however turned in its sixth weekly bullish forecast for gold last night with a tally of 16:10 voting for higher prices next week. The projections have obviously missed their targets for the better part of that month-and-a-half as you will see below.

Meanwhile, Credit Suisse commodity market specialists are in the process of revising their price forecasts for gold, oil, and copper in coming weeks but they have already given indications that, in their opinion, there are no big price advances being factored in, in the wake of the recent losses in the sector. The difficult situation in Europe, the modest growth levels (1.9% reported yesterday by the BEA) of the US economy, and the apparent slowing of China are all converging to result in such price projection revisions, and not just those being made by Credit Suisse. Here is another take on the matter by market strategist Yoni Jacobs as told on CNBC the other day. Ready for $700 gold? The gentleman apparently is.

The ETF Guide.com’s Ronald Delegge remarks that "the early warning signs behind gold’s fall beneath key trading levels have been months in the making."

He added that "gold flirted with falling 20% from its peak multiple times during the second quarter and has already forfeited the gains from its strong start earlier in the year. In the three months up through the May 24 market close, the SPDR Gold Shares (GLD) lost 12.09% in value. From a technical perspective, GLD is trading below both its 50 ($158.57) and 200 ($164.63) simple day moving averages, which means the trend is still down."

The final trading session of this week started with a "euro-bang," as the bulls were emboldened by the surprise overnight announcement that the EU leadership has agreed to recapitalize certain banks with funds from the EFSF and that a single supervisory banking agency might be created. However, gold is still set to finish Q2 with its worst decline in eight years and that is a fact that ought not to escape the perma-bullish crowd.

A near six-percent loss is not something that those who jumped in during the first quarter, expecting a replay of gold’s previous runs over eleven years expected. It was also not what the expert crowd that is polled each week by Bloomberg News had anticipated for six weeks, back-to-back. But, hey, that’s the nature of markets. They have that uncanny ability to turn forecasts into pudding. This is precisely why long-term oriented gold buyers ought not to care much about week-to-week gyrations in prices, if at all.

Reuters reports that market watchers are less than sanguine about the latest EU batch of measures and are calling it mere "plaster on an amputation." In essence, this morning’s rally only highlights the fact that gold has become "just another risk-on trade" and that when one see it climbing nearly 2% right along with crude oil (up 3.72%), the euro (up 1.15%) and equities, there is something fundamentally amiss in the equation even if — for a change — at least the gold/dollar traditional inverse correlation reasserts itself.

Spot gold opened at $1,580 per ounce as the EU relief rally in commodities continued its overnight advances. Spot silver climbed 92 cents to $27.24 the ounce. Platinum advanced by $24 to $1,411 and palladium rose $10 to $574 per ounce. The moves were all described as technical in nature, with buy stops being triggered and with momentum players joining at each successively higher level. We mentioned in yesterday’s Street.com video that summertime out-sized moves will be the order of the day and that news items of one or another flavor will make for roller-coaster experiences for those brave enough to remain on board the gold ride during the "summer doldrums." The US dollar’s 0.80% decline on the trade-weighted index as the euro benefited from the summit-related news from Brussels.

Investor physical demand in the US remained tepid as reflected by the quarterly sales tally of the gold American Eagle coins by the Treasury Department’s U.S. Mint. The demand for the bullion coins fell to its lowest in four years, and it amounted to but 127,500 ounces; a number that was down more than 39 percent from the first quarter of this year and down by more than 50% on a year-on-year basis.

As regards India and its physical demand, well, there seems to be no end to the not-so-gold-friendly news coming out of that country of late. First, in a fast-buried Wednesday news item, it was reported that the Reserve Bank of India is considering halting the sale of gold coins by the banks of that nation. Now, 80 tonnes of gold sales that might not take place does not sound like a lot, but the implications of the measure once again underscore the resolve of the RBI to curb overall gold demand one way or another, as it is a sizeable contributor to India’s current account deficit.

Few people however, realize that according to an RBI official, the "[Indian] banks were allowed to sell gold by importing it to fight the excess dollar flows. By the same logic, the measure should be reversed now as we are at the opposite end of the spectrum. It was a temporary measure, which unfortunately was made permanent by banks."

At the very least, the Indian central bank will now aim to curb the "enthusiasm" with which bank staffers have been "suggesting" gold purchases to customers.

The Business Standard reports that "In its recent interactions with bankers, the central bank sounded its discomfort over the practice of banks pushing gold coin sales and asked them to go slow. However, banks have not stopped the practice of incentivising their staff to push gold sales, as they earn a margin of Rs 100-150 per gramme of gold sold." Nice margin, if you can get it, but at what cost to India’s finances, at the end of the day?

At any rate, the previous RBI "jawboning" about tempering gold demand by India’s citizens and the imposition of tariffs and/or taxes has already made a dent in the tonnage being imported into the country. To wit, the $9.2 billion worth of gold and silver imports that were tallied in 2011 during April and May have dwindled to only $4.3 billion this year. India doubled its import duty on gold to 4 percent in March in a bid to reduce the value of imports and ease its current account deficit, helping to slash first-half imports by 58.7 percent to 250 tonnes.

Is any this of import to gold perma-bulls? You bet it is. Noted commodities aficionado and guru Jim Rogers recently admitted to the Business Insider that gold could fall 40 to 50% in value if India ceased gold imports or if Europeans began liquidating their holdings. The President of the Bombay Bullion Association expects gold prices to fall and to possibly test $1,400 per ounce this year as the flight to US dollars and the typical strength that the greenback exhibits during election years take their toll.

Several days ago we also mentioned that it would be wise to keep an eye out for… the weather as regards future (fall) festival-related gold demand in India. Less rain means fewer crops, which, in turn, means less cash available to spend on baubles by rural India’s residents. While there is still time (and hope) that the worst start to the monsoon season in three years could be turned around, the current situation not only has farmers and the weathermen up at night, but also the country’s jewelers. The season ends with the harvest in September and is followed by a traditional buildup of bullion demand into Diwali — which starts this year on the 13th of November.

Meanwhile, Japan‘s gold exports fell to a 15-month low in May. The country exported only 2.79 metric tonnes of the yellow metal, down 67% from the 8.3 tonnes that had been exported one year ago in the same month. Standard Bank (SA) analysts noted that the sharp fall in Japanese gold jewellery and investment demand in April and May led to the dramatic decline in that country’s exports.

In late 2011, the surge in gold prices to a record above $1,900 engendered a huge rise in gold scrap sales from jewellery and bar disinvestment among Japanese consumers and investors. Albeit Japanese investors had been the stand-out and most notable sellers into rising gold prices for several years now, the achievement of such lofty price level drew an even more sizeable amount of bullion out of their hands towards the end of 2011. Well, at least one group of investors appears to pay attention to the (by now trite) adage of "Buy Low / Sell High… "

Speaking of which, let just see what the longevity of the relief rally is as we roll over into July. We have already intercepted news that the euro has been unable to build on its overnight gains as the "Europhoria" manifest during the wee hours started to wear off and a more cautious level of optimism replaced it. Germany may have fallen in the semi-finals of the UEFA, but it apparently still has the most reasons to be smiling…

This morning, the Wall Street Journal summed it all up as follows:

Have a nice weekend, everyone.