Friday’s market action in precious metals got off to a bit of a mixed and rocky start as the US dollar continued its ascent on the trade-weighted index and as traders began to square books and close the trading logs on a quarter that will still go down in the record books as the worst one since 2008. The yellow metal has lost about 11% on the month in a negative performance reminiscent of October of that somber year.

Gold suffered its seventh worst week in 40 years with its recent plunge. Spot gold opened with a very tentative $4.80 gain that turned to a $4.60 loss within the first half-hour of trading. Silver never really got going to the plus-side this morning; it opened with a loss of 38 cents that turned into a drop of 75 cents within the same timeframe.

Platinum initially gained $4 only to turn that into an $8 loss and palladium deepened its initial $3 loss into a $6 one. The noble metals’ complex was apparently preoccupied with the overall sense of malaise that has gripped the rest of the commodities’ sector and it largely ignored news reports that indicate the return to full production of automakers Toyota and Honda. As well, US auto sales are expected to show a return to pre-Japan-quake levels when they are released on Monday. Stay tuned and keep the foot on the gas pedal.

Speaking of peeling away, the prices of so-called "rare earths" — a niche much touted at many a recent hard money conference — are peeling off faster than the autumn leaves. After having reached records earlier this year, the rare earths are returning… to Earth as firms such as GE and Toyota have begun closing their wallets in the wake of sky-high prices and are seeking substitutes. China has apparently hit a wall in trying to lift prices on the stuff to levels that were nausea-inducing.

Would-be investors were mesmerized with wild promises of rare earths ‘moonshots’ and they were duped into thinking that this space was the next ‘big thing.’ Turns out, the elements in question are anything but… rare. It also turns out that the depletion date for these metals is the year… sit down now… .2800. Okay, we might run out of tantalum in the year 2105 and out of indium in 2040. However gallium should last, oh till about 14,830 give or take.

Neodymium, for example, is more abundant in the Earth’s crust than lowly lead is. BTW, the "zero date" for platinum is 2170. Better secure that engagement ring for your granddaughter now… not later. Here is a quite colorful "eye-opener" on the supply of some of these exotic elements, courtesy of WIRED magazine: 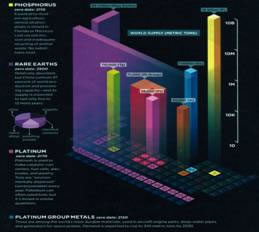 Much of the Friday morning commodity trading focus remained on the surging greenback (up 0.50 to 74.39 on the index while the euro slipped to under $.135) and on slipping crude oil (down $1.1 to 81.05 per barrel) and copper (down 1.4% this morning). In fact, black gold was itself on track to record its worst quarterly performance since the above-mentioned year of crisis. Copper has fallen 25% since August 1st while silver received a 40% haircut from high to low this month. More like a complete shave. Europe-related growth concerns are keeping the selling pressure on in the commodities’ niche.

The commodities’ space also got hit this morning by news that China’s manufacturing sector shrank once again, making for a third month of such a decline. Not only that, but the Chinese government’s Public Enemy No.1 — inflation-showed a continued ability to rise (at least at the factory level) and the metric reignited fears that more tightening courtesy of the PBOC could be in the policy pipeline. Ask a bunch of global investors where they see China in five years’ time and the response they give is anything but that which you continue to read in various commodity-propagandizing newsletters.

Most respondents see China’s GDP growing at but 5% by 2016 — about half of its current 9.5% level. That’s a shocker, to be sure (so much for the "insatiable commodity demand" from China arguments). It implies a hard-landing for one of the world’s top economies. Those dour expectations do not even begin to factor in the potential outcomes of the possible implosion of China’s shadow banking (make that: shadow lending) system.

In so many words, China is sitting squarely on top of a loudly ticking nuclear device of two-thirds of a trillion dollars’ worth of informal loans. Developers who have borrowed astronomical sums at rates ranging from 14 to 70 percent stand to run out of cash within the next half a year unless the PBOC eases its grip on tight credit. If such alarming reports are even halfway correct, the Chinese economic "miracle" is suddenly taking on the odor of a… mackerel, and the possible "China Syndrome" type of event that such a situation might yield could make the US and (current) European crises seem like a very pleasant day at the park.

This is the BIG Chinese gorilla in the global economic room that everyone should totally fear, including those who see unending boom times for gold, mainly on account of (present and future) Chinese buyers. Much as some would like to say that gold is strictly an investment for the Chinese public, it is in very large part right up there with other high-end luxury goods and status symbols. Do the math and go see the plethora of billboards around Shanghai that try to seduce young working women to cover themselves with gold they "deserve" after a hard day at the office.

Speaking of difficult days at work, some of those may be in store for Mr. Boehner up in Washington DC, soon. Someone needs to break the following news to him… quickly, and gently. It is time he became aware of the impending reality. We leave you now with this little excerpt from the folks at Bloomberg News:

"Global investors overwhelmingly support President Barack Obama’s proposed tax increase for those earning annual incomes of $1 million or more in an effort to reduce the deficit. By a margin of 63 percent to 32 percent, respondents in a Bloomberg Global Poll approved of the president’s proposal, known as the "Buffett rule" in a nod to Warren Buffett, the chairman of Berkshire Hathaway Inc., who has said it is wrong that he pays a smaller share of his income in taxes than does his secretary. Obama said Sept. 19 that making sure that the wealthy pay at least the same tax rate as the middle class was "just the right thing to do." House Speaker John Boehner accused the president of practicing "class warfare," saying any new tax would hurt job creation and Buffett’s situation was not typical."

Let’s see if "majority rule" has any meaning.

Have a pleasant weekend and to our Jewish readers, also have a healthy, happy 5772! L’Shanah Tovah Tikatev V’Taihatem.