Bullion Articles and Precious Metal Reports In The Lead – Let’s Do The Twist (And Shout The Buffett...

Metals prices were initially only slightly weaker as the markets opened for the new trading week in New York this morning.Gold lost $1.20 on the open to trade at $1,811 the ounce on the bid-side, while silver fell 55 cents to start Monday’s session off at the $40.11 mark. The white metal later lost nearly 3% as the selling spree that took over all markets pushed it to $39.52 per ounce.

For gold, the maintenance of the $1,800 level was still a priority lest it risked heading back towards the $1770’s and/or lower given the market’s speculative positioning metrics (described further below).

In fact, gold’s Friday gains evaporated fairly promptly in the mid-morning as the metal hit a shoal of unanticipated selling and ran aground; all the way down to the $1,775 area. Traders blamed the slide on the resurgence of the "sell everything" (but the dollar) syndrome that funds have regaled us with every so often. The gold perma-bulls quickly cited the purchasing of… 800 kilos (not a misprint) of gold by central banks as a momentous new event in the annals of gold’s history.

Yes, but the contrarian argument about central banks basically doing the opposite of what they ought to normally do, still applies. We cannot have it both ways and declare that central banks are behind the curve on every policy step and agenda issue but when it comes to the issue of how they and why they buy or sell gold. See one Gordon Brown, circa last century…

Stocks in Asia and Europe fell this morning and the S&P futures were indicating that a similar fate was likely awaiting the US markets on Monday. Recall that the S&P 500 had posted its best weekly performance since 2009 just last week. In fact, the Dow sank by 163 points pretty much out of the market’s starting gate this morning. The week ahead is once again shaping up as being as volatility-laden as recent ones have already been, and perhaps more so. Treasuries, oil, gold, the dollar might all be buffeted by… one Mr. Buffett and his "rule" as well as what the Fed might have to say about the new dance it plans to possibly adopt: it’s called "The Twist."

Ah, the Fed! What would the news outlets (and speculators) do without it? Well, their prayers for fresh stories will be answered this very week as it turns out. The US central bank meets over two days, starting tomorrow. Rumor has it that in addition to a new possible agenda of setting targets (!) for unemployment and for inflation (the former is quite the non-mandated and novel preoccupation for the Fed) the Fed’s Board is also considering dancing "The Twist." The maneuver involves the possible unloading of short-dated assets and their replacement with longer-dated ones.

Quite the dance, this one could be. In fact, it could become the US dollar’s victory dance, contrary to the "conventional" wisdom that sees every Fed meeting and every Fed action as the imminent reason to start making funeral arrangements for the greenback. The fact that there will be no QE3 is not the cause for the dollar’s morticians to fear the upcoming meeting. It is, however, the fact that "The Twist" might make for higher short-term yields and also obviate the need to further bloat the Fed’s balance sheet with more assets (seen by some as de facto dollar-printing) is what should keep the dollar alarmists up at night right about now. Fear not; they remain blissfully pessimistic about the US currency’s prospects, even as we speak.

Something else that could impact the (hitherto) beleaguered US dollar further down the road is the brewing budget-cutting storm in America. Forty years of rising wealth and profits for the "job-creators" coupled with four decades of falling wages and the advent of a lethal credit binge that was intended to mitigate the effects of said falling wages (for the worker bees) have resulted in the current mess that threatens to derail the American gravy train — from locomotive to caboose.

Mr. Buffet — one of America’s richest individuals — has, in effect, signaled to his peers that the time may have come to "pay" (at least partially) one Mr. Piper, lest the elites are prepared to endure the type of social upheaval that has hitherto been the exclusive "privilege" of certain Second and Third World nations. See the "Arab Spring". It is now possibly morphing into the "American Autumn." Enter President Obama, who, today is set to unveil his long-term deficit reduction plan that totals upwards of $3 trillion.
Surprise! Half of the budget-balancing high-wire act is indeed, supposed to come courtesy of spending cuts (including some sacred cattle). However, the other $1.5 trillion is intended to come from… you guessed it: higher taxes on those who can well afford it. We have long warned that any comprehensive solution to the American budget trouble cannot and will not lack higher tax revenues. This, despite the conniption fits that Messrs. Trump, Romney, and/or other "job creators" might throw when asked to give up a modicum of their sky-high piles of amassed cash.

"Class warfare at its finest" – argue some. But, look no further than UMass/Amherst Prof. Richard Hoffman’s "Capitalism Hits The Fan" lecture or the brilliant "Crises of Capitalism" cartoon to fully grasp the causes and effects of what it is we are dealing with here. Not a financial crisis, at all. Not a budget situation that can be fixed with Tea Party formulae by which the poor are to survive only if they are fit to. A preview of things hopefully not-to-come, courtesy of Bloomberg photographer Ramin Talaie — it was taken on Saturday. THIS Saturday… 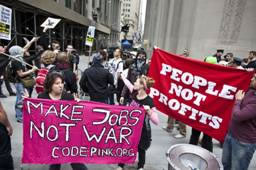 And so, the eurozone crisis began to take a backseat for possibly the remainder of the week as the upcoming meeting of the FOMC and the unveiling of a $3 trillion budget-cutting plan by President Obama slowly started to occupy most of the financial news headline space and the inner cranial space of most speculators and investors this morning. Albeit Greece’s ability to skirt a default might very much be subjected to a test this week the reassurances about Greece not being jettisoned from the EU coming from Chancellor Merkel and President Sarkozy last week did make for a one percent gain in the euro against the US dollar.

Don’t ask the hedge funds to share such optimism however; their CFTC-tallied bets against the common currency are at their highest levels since June of 2010 even as talk of a $1.50 euro-dollar crept into the marketplace as some see aggressive central bank support for the currency in QIV as a certainty. We got a preview of such coddling just last week when a cabal of five central banks injected dollar-based liquidity into a parched banking sector in Europe.

Speaking of the "hedgie" crowd, behold a further cut in their bullish bets on "stuff" as mirrored by the latest CFTC positioning reports. The spec squads reduced their net long positions in raw materials for the first time in five weeks in the reporting week that ended on Tuesday. That would be 1.2 million futures and options contracts fewer. Leading the pack of reductions was industrial bellwether metal copper; its bullish bets experienced a 91% contraction on the perception of… contraction in the global economy being imminent. The orange metal fell to a nine-month low last week on the heels of such negative perceptions even as labor strife at producer FCX’s Indonesian and Peruvian mines should have lent support to it.

Gold’s net longs were also seen heading for the exit doors of futures and options as they resumed the reduction of their positions and as the speculative shorts piled on more bets on their side. In fact, the gain in net short positioning now runs above last year’s average of approximately 91 tonnes and it appears to indicate additional vulnerability in gold. Such increased wariness was also manifest in the positioning makeup of the platinum and palladium markets.

The palladium market’s net speculative length shrank by over 200K ounces last week in the wake of a 100K+ addition to short positions and an unwinding of long ones to the tune of 96K ounces. The development might portend price declines in that noble metal. Perhaps some of the caution manifest in these shifts came on the heels of some European carmakers expressing doubts about Europe’s overall ability to keep buying lots of cars in 2012 if the debt crisis persists or if it knocks the region into an economic contraction. Much depends on the Old World’s leadership and banking sector at this juncture, but local would-be car buyers are still short of exhibiting a lot of confidence. "Subprime" confidence levels make for subpar car (and home sales) — that’s a phenomenon that’s been on display in the US for a while now.

Another banking sector — that of China — is taking on the unpleasant, "subprime" flavored taste that sparked the whole mess the global financial and economic sectors are still embroiled in at the moment. A huge pool ($1.7 trillion) of loans to local government investment vehicles that could turn into "IEDs" (Incendiary Economic Devices) at any time has many a Chinese lender up at night these days. A virtual explosion of all sorts of unregulated lending has been noted in that country, and the activity is outside of the banking system. Let’s just call it micro-financing with a macro-potential for deep trouble.

Until tomorrow, do try to keep out of (financial) trouble.