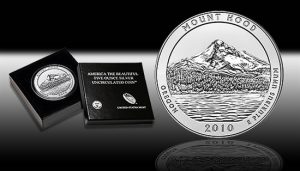 The collector five ounce silver uncirculated coin honoring Mount Hood National Forest went on sale July 28, 2011 with an order limit of one per household. The United States Mint pulled the limit this week, giving buyers an opportunity to order as many as they want.

Still priced at $279.95, the Mount Hood silver uncirculated coin is not available in unlimited quantities, however. With a 27,000 mintage limit and 20,994 of those already purchased as of September 5, less than 6,000 now remain.

The Mount Hood coin for the state of Oregon is the final 2010-dated issue. The previous four issues within the same America the Beautiful Five Ounce Uncirculated Coin series sold out earlier this year. Those United States Mint coins in the order of their release honored the national parks of Hot Springs (AR), Yellowstone (WY), Yosemite (CA), and Grand Canyon (AZ).

The first two uncirculated coins each sold out in two weeks but the sales pace slowed for the third, fourth and now fifth issue. Mount Hood’s order limit removal should quickly spark several hundred to a few thousand in sales based on the 2,000+ that moved within a week after the limits were yanked on Grand Canyon.

Interestingly, based on the product page for the September 22 release of the next five ounce silver uncirculated coin which celebrates Gettysburg National Military Park (PA), the Mint plans to increase the per household order limits (from one to five) and the coin’s mintage limits (from 27,000 to 35,000). The price is expected to be the same $279.95.

Types of America the Beautiful coins

America the Beautiful coins celebrate one specific national park or area located within the 50 U.S. states, DC, and the five U.S. territories. There will be 56 designs in total featured between 2010 and 2021. Each new design will be shown on the reverse of:

The bullion versions, intended for investors, have the same 3.0 inch diameter, .999 fine silver purity and five-ounce weight as the collector coins. Aside from their different finishes — the bullion coins are brilliant while the uncirculated coins have a matte finish, the major distinction between the two types comes down to a mint mark. The bullion coins do not have one while each of the collector uncirculated pieces bear a "P" mint mark on their obverse to denote their production in Philadelphia. The United States Mint has already released each of the 2010 and 2011-dated bullion coins. The first seven sold out. The final three remain available.

All America the Beautiful coins feature the familiar portrait of George Washington on their obverse.

No thanks on the Gettysburg. or any more for that matter.

I bought the Hot Springs and was a little ticked to find the dealer varieties selling on e-bay for less than the $279.95 (+ S/H)…I liked the challenge of getting one of the first, but should have waited out the market to see where they settled in cost. I now look at it as a long-term, hope to get the $$$ back down the road. But honestly, all of the mint special products secondary markets are fickle. Look at the 1999 silver mint set half the cost from 2 years ago. 2001 Buffalo silver commem has dropped also in past… Read more »