Gold prices opened with double-digit gains on Thursday and touched $1,817.90 per ounce ahead of the New York session’s start even as the US dollar reclaimed the 74.00 level on the trade-weighted index. For a change (but not much of one) silver tried to keep in lockstep with gold but managed only a 20 cent rise out of the market’s starting gate (to $40.44).

In day-to-day reversal of fortunes, platinum and palladium declined as some profit-taking emerged in the wake of yesterday’s rallies and as the impact of demand-based apprehension made itself felt in the trading pits. The former lost $1 (quoted at $1,836) and the latter fell $5 (to $767) as the action got underway in New York.

Demand-oriented worries continued to batter industrial metals and crude oil as well at this juncture; losses of over 1.3 and up to 2% were tallied in base metals and black gold this morning, undoing yesterday’s attempts at a rally. In the background, crude oil was being hit with a 2.3% loss and was trading at $85.54 per barrel. While that price tag does not translate into $2 per gallon premium gas at your local friendly station just yet, fear not. Would be President-ess Bachmann promises such prices under her future putative leadership.

Of course, you are not being told just how such a feat (one that befits an evening with David Copperfield in Vegas) might be achieved. Suffice it to say, economists who have read the pledge conclude that the USA might see such prices only if and when deflation was decimating its economy at full speed. What price $2 gas? Don’t even go there…

A day of losses in overseas equity markets appeared to be set to continue on this side of the globe as well as the sun rose over North America this morning. Risk aversion and a generalized malaise continue to grip the investment psyche despite any concrete event (default, downgrade) or announcement that spells "doom."

Nevertheless, at least in Morgan Stanley’s opinion, the US and the Old World are presently hovering "dangerously close to a recession." As Lloyd Bridges might say in a sequel to "Airplane!" today: "Looks like I picked the wrong time to embark on fiscal tightening." The difference-this time around-might be that China could be unable to step in and "pick up the slack" as it managed to do back in 2008, as it is itself actively trying to engineer a slowdown.

Anticipation of some kind of gloom, however, is at a fever-pitch and it is translating into yet another push in gold towards the record area visited just last week, near $1,820 per ounce. Data released in the US (CPI for now, the July LEI, and existing home sales later on) also contributed to the shaping of the markets as the day’s trading got underway. Meanwhile, the Swiss National Bank continued to try to keep the fire hose at full bore on the franc by adding more liquidity (80 billion Swissies’ worth to be exact) to the banking system there. Don’t count on much success just yet.

The US’ CPI climbed at 0.5% in July — the largest gain in that metric since March. Core CPI (watched more closely by economists) came in on target, rising 0.2%. The data that most likely depressed Dow futures and contributed to a near-$30 gain in gold in the first half-hour of trading was the initial jobless claims filings; it vaulted back to above 400,000 — by 8,000 requests for such benefits.

The lure of cheap(ening) stocks did not manage to win over global investors as five major Asian equity market showed, with assorted losses of over 1.2% each, during the overnight hours. Albeit abject desperation levels that were manifest last week have morphed into a more "basic" apprehensive state at this stage, global investors appear unwilling to accept the rough patch into which the world economy is lurching with anything other than a flight from the markets.

As a result, so-called "death crosses" have been seen popping up in various indices (S&P 500, Russell 2000, and the Dow) including the XAU. Owners of stock mutual funds are dumping them at a rate not seen since the bloodletting of October of 2008, and they have been doing so for nearly months. Large as the flight of money appears to be from the sector, consider the $6 trillion still invested therein and the fact that the exodus amounts to about half of one percent of all equity-based assets.

It was announced yesterday that US President Obama plans to ask Congress for long-term spending cuts that go well beyond the $1.5 trillion that the bipartisan "super-committee" will try to shape into existence by around Thanksgiving time and that he will also ask legislators to earmark some sizeable amount of money towards creating the jobs that the US economy appears to be in need of. In all, the Obama plan is said to contain deficit reduction measures that more than countervail the short-term expenditures aimed at boosting the flagging US economy and jobs scene.

Also yesterday, we heard from one of the Fed’s "traitors" as to why he dissented from the recently adopted language that implies low rates for a couple of more years. Dallas Fed President Fisher flat-out told an audience in Texas that the Fed’s "easy money" policy is doing very little to bolster economic conditions and that it might be interpreted by some as the "Dow wagging the Fed’s tail" in a manner of speaking.

Other dissenting members of the Fed’s FOMC also made clear their actions by saying that either a) current conditions did not warrant a policy (or language) change or that b) the Fed might have just waited until at least September to consider any action and not acted so quickly (too quickly). The "extension" is seen by many as a pledge but is has not done a whole heck of a lot for the Dow since it was first aired. We remind readers that the FOMC did not commit to actually hold rates at present levels through mid-2103, albeit that is the commonly held view by many.

Finally today, the tallies for gold demand during the second quarter are out, and they contain more contradictions and warning signals than might be apparent at the first cursory glance. The ground under this gold market continues to shift and it is exposing some tectonic faults that could eventually set off some might tremors if the "ideal" conditions converge. It is becoming apparent that ultra-high gold prices are bringing about certain trends in the key components of supply and (mostly) demand that should not be ignored, current headlines notwithstanding.

To wit, the second quarter — a time of major turmoil in Europe and developing turmoil in the US — saw gold demand drop, by a not insignificant 17% (versus the same period in 2010). Only 919.9 tonnes of the yellow metal were absorbed by the marketplace, mainly on account of… waning investment (?!) demand. While jewelry managed a 6% climb (Indian wedding season hardly ever fails to make its contributions) and industrial demand notched a 2% gain, the "trouble" that brewed in the investment niche was… troubling.

There is apparently no explanation as yet being tendered for the sizeable 82% (!) decline in gold demand from the ETF sector other than the notation that it was difficult to match that which happened in 2010. What gives? The crisis of the spring-summer of 2011 appears to be orders of magnitude larger than that which roiled markets a year ago at the same time. Shouldn’t funds be climbing all over each other trying to pile into the safety of gold? Was the crisis playing out all over the place only good for 52 tonnes of ETF based investment demand, a 7% fall in official coin demand, and a 37% decline investment demand overall? Evidently so.

But, no mention is being made of the fact that some fund money was (and continues to be) pulled off the table and that other fund money perhaps considers $1500-$1800 gold as a tad… costly. Central bank purchases also came in well below the levels that were recorded in the first trimester of 2011.

At any rate, there appears to be something developing in the investment category for gold demand; the one category that has almost solely defined the market, and to which the market has become fully addicted to, over recent years. To be watched, and to be continued. Meanwhile,(no surprise) the supply of gold from mining activity rose by 7% on the reporting period, to 708.8 tonnes.

Here is how the situation is shaping up, in visual terms. Just a theory: prices do have something to do with this. Try to ignore the diverging gold price / gold demand trend (if you can): 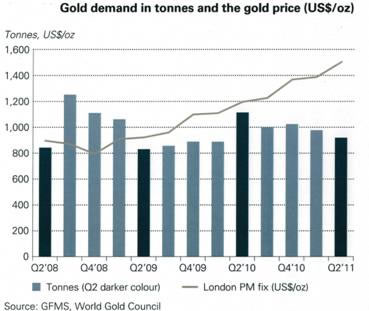 CoinNews.net - May 17, 2022 6
Precious metal prices increased on Tuesday with advances ranging from 0.3% for gold to 2% for platinum. Silver and palladium marked their third straight...