The world’s third largest bond market, that of Italy, teetered on the brink this morning and the situation prompted Bank of America Merrill Lynch to caution global investors about the potential for a "tail risk scenario" of the most unpleasant kind. The bank’s analysts warned that further erosion in that country’s bond market could result in the derailment of the emergent global economic recovery and that financial markets would not take such developments in stride.

Among the few possible solutions to the spreading credit debacle offered by BofA was the suggestion that the EU’s leadership considers "strengthening" the European version of TARP, also known as the EFSF (European Financial Stability Facility). The risks to the euro that the cautionary note from Merrill implies are all too obvious, so we shall leave them implied. Anyway, the raging Italian-focused jitters continued to unnerve global markets this morning and kept the pressure on the commodities’ complex as well.

The aggravating peripheral eurozone government debt situation not only has investors throwing the euro and European equities overboard, but it has reignited bets on the potential breakup of the union (and with it, the currency that holds it together). A picture that "speaks" a thousand (or would that be a trillion?) words, for you to contemplate, below. Italy, shall we say… stands out? 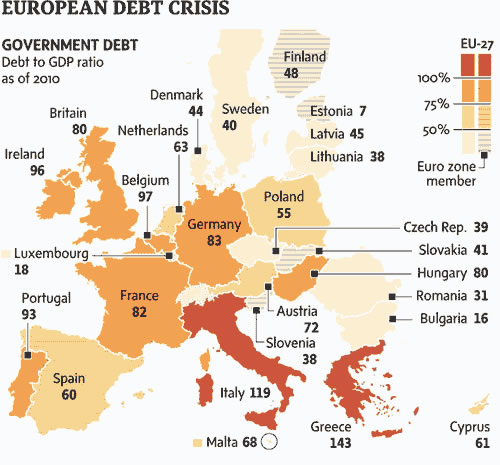 Now, just in case one concludes that the picture above presents a bleak prospect for investors in all things European, well, you might want to hold that thought for just a moment. Marketwatch’s Robert Powell tenders the opinion that the failure to raise the US’ debt ceiling by the August 2nd deadline would have a truly devastating effect on ALL markets: bonds, stocks, money markets, commodities, etc. Mr. Powell cites CFA Greg McBride who argues that the meltdown of 2007-2008 could be labeled as a mere hors d’oeuvre for the feast of the bears that might come in the wake of a no-deal debt deal in America.

Mr. McBride minces no words and declares that the event would prompt a ""rapid re-pricing" of all financial assets, not just Treasuries. In other words, the value of your 401(k) plans, IRAs, 529 plans, gold and real estate will all collapse.

And this time, investors won’t have a safe haven to which they can flock as they did during collapse of 2008. "There will be no place to hide," said McBride. "Treasuries will no longer be safe in the event of a default." Ditto real estate, gold, and farm land. In short, there will be no flight to safety because no asset will be safe. "Even cash might not be a safe haven." No exit. No safety net. None.

Spot gold dealings started the Tuesday New York session off on the downside, with the yellow metal losing $7.00 and being quoted at $1,547.50 per ounce. The US dollar remained above the 76.00 mark on the trade-weighted index as it was seen attracting further wads of safe-haven-seeking cash among the aforementioned nervous global investors. The Dow finally stabilized and made an ever so small attempt at a gain this morning; it was trading at or near the 12,505.00 level.

The yellow metal hit a new all-time high in euro terms this morning, but the achievement prompted economist and newsletter publisher Dennis Gartman to reduce his gold position against the common currency as he deems the price equation to have become "overextended" at this time. EW analysis deems the test of the $1558.75 mark (or even a slight push above it) as "terminal" and that gold should turn down sooner rather than later after it exhausts its current run to the upside.

Silver opened with a loss of 67 cents per ounce and it was quoted at $35.08 per ounce on the bid-side. The white metal’s ability to pierce above the $36.80 resistance has opened up the (slight but realistic) possibility that it might try for a run towards the $39.82 target prior to resuming a broader downtrend. Only a close beneath the $33.15 level would cement silver’s fate and send it under $30 as a first step.

Platinum and palladium slipped as well this morning, with the former opening at $1,719.00 (down $4) and the latter losing $13 to start at $752.00 per ounce. No changes were noted in the rhodium quotes in New York. Automaker VW continues to be on a sales roll; it announced first-half 2011 sales of four million units globally, which was a first for the firm.

VW continues to rely on robust vehicular sales growth in the BRICs and it is now also considering the establishment of an Audi factory in North America. In China, the carmaker plans to invest more than 10.5 billion euros into expansion plans and globally the firm intends to hire more than 50,000 workers through 2018 in order to achieve its 10-million annual sales target. With this morning’s announcement, the 2018 goal is not very far away from being achieved, indeed.

On the other hand, China is not yet reaching the point where it can declare that domestic bank lending and money growth are well-controlled. The country’s banks lent more money than had been anticipated during the month of June as demand for credit remains robust despite the overt moves towards tightening by the PBOC.

We noted Saturday’s announcement that inflation has hit a three-year peak in China. Now comes word that the country’s foreign exchange reserves have swelled to the $3.2 trillion mark as of the end of June. Add it all up, and the case for additional monetary restraint is an open and shut case. That said, Premier Wen has cautioned that over-tightening might not be all that good, either. Slowing China’s growth too much has its own potential set of consequences, some of which (the social ones, to be precise) are more… unpleasant than others. A delicate balance to maintain, that one is.

Over in Japan, the government and the Bank of Japan remain optimistic about the pace of the country’s post-quake recovery process and a more upbeat projection about the Japanese economy was tendered by officials this morning. The BoJ on the other hand is keeping rates on hold for the time being, just in case further nuclear plant shutdowns might come to impact economic growth in the country.