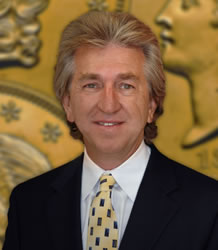 Award-winning author Jeff C. Garrett will present a free public seminar, How to Accurately Value United States Coins, during the Official ANA-PNG Pre-Show in the Donald E. Stephens Convention Center in the Chicago suburb of Rosemont, Illinois, on Monday, August 15, 2011.

The two-hour seminar will begin at noon in room 55, and is part of the ongoing PNG Share the Knowledge educational programs for collectors and dealers at major coin shows around the country.

The price you pay for a coin can have profound consequences on your long-term investment in rare coins; yet determining a coin’s value can be as complicated as grading, Garrett explained. During the seminar I’ll discuss behind-the-scenes information about how numismatic professionals determine prices when they’re buying or selling, and how the ‘Redbook’ (A Guide Book of United States Coins) is put together each year.

Widely-respected as a dealer’s dealer, Garrett is the author of Encyclopedia of U.S. Gold Coinage, co-author of 100 Greatest U.S. Coins and serves as Valuations Editor of the annual Redbook.

In addition to the upcoming PNG Day, Saturday, August 13, we are jointly conducting an official pre-show with the ANA, August 13 – 15, prior to the Chicago ANA World’s Fair of MoneySM, August 16 – 20, in the Stephens Convention Center, said PNG Executive Director Robert Brueggeman.

Founded in 1953, the Professional Numismatists Guild is a nonprofit organization composed of many of the top rare coin and paper money dealers in the United States and seven other countries.