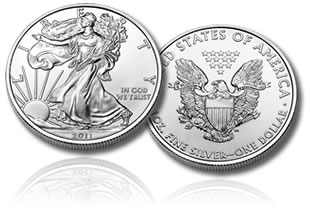 The United States Mint on Tuesday began fulfilling orders for 2011 American Silver Eagle Bullion Coins from its facility in San Francisco, CA, in addition those minted at its West Point facility in NY.

Since their introduction in 1986, the American Silver Eagle has become one of the world’s most recognizable and best selling silver coins. The bullion issues have been produced at various U.S. Mint locations over the years, but for more than a decade they had been struck only in West Point.

San Francisco production was added due to the unprecedented demand for investment-grade .999 fine silver coins, the US Mint indicated in an announcement. Already, more than 18.2 million 2011 Silver Eagles have sold and there are no signs of a slow down. Sales based on current rates are expected to top 2010’s historic record of 34,662,500.

Although two facilities are now producing the bullion pieces, the United States Mint plans to continue weekly inventory allocations among its Authorized Purchasers. It also reports there will be no physical distinctions on the strikes to indicate which facility produced them. Both will use the same production methods and packaging. Plus, U.S. Mint silver bullion coins do not carry mint marks, adding to a lack of any differentiating factor.

"The United States Mint conducted American Eagle Silver Bullion Coin trial strikes at San Francisco in March. The San Francisco facility will use the same manufacturing process and packaging currently used for coins minted at West Point," the Mint reported in an official statement. "There will be no visible difference between the coins, and they do not have a mint mark. The United States Mint has the capacity to mint up to several hundred thousand coins per week in San Francisco."

West Point also manufactures the collector proof an uncirculated American Eagle coins in gold, silver, and platinum. It strikes the bullion and proof versions of the 24-karat one ounce American Buffalo Gold Coins and several 2011 commemorative coins as well. The San Francisco Mint produces many proof coins and sets, in addition to some of this year’s commemoratives.

Collector versions of the American Silver Eagle will start later this year. The proof Silver Eagle is scheduled to launch June 30, but the uncirculated Silver Eagle release date has yet to be announced.

and For the Love Of God Please Give em a Face Value of $38 or Whatever The Price of an Ounce Of Silver may Be.

your own post shows why they can’t. what happens when the price changes to whatever, do they change the face value every month when they make more. how well would that work?

These bullion coins should bear an “S” mintmark (as should any cents made in the West Point facility when it gets pressed into service) if not for historical precedent, at least for honesty (or for assay purposes). If anything, so long as the mint doesn’t deliberately prolong the practice of issuing SAEs from the San Francisco mint, the program I think would receive a boost from collectors of this stuff. In addition, it would give the SAE set character. After all, weren’t branch mints created to address demand like this in the past? Imagine if New Orleans had not placed… Read more »

If the USMINT gives this coins the face value of bullion, It would’t make a difference, just Like the Big old One Dollar face value on them right now. sure it says ONE DOLLAR, but no one ever sells it for a buck, Please for the Love of God, am not at all suggesting to go back to The GOLD DAYS, But We as collectors and investers buy this coins hoping they to go up in price some day, How Cool would it be if you Had a $38 dollar silver coin 30 yrs from now when silver is $324.78… Read more »