Following Tuesday’s worst drop in commodities in one month, the markets recovered somewhat during the overnight hours as sporadic bargain-hunters emerged and were seen as buyers.

The slump we observed yesterday came on the heels of a Goldman Sachs bulletin advising profit-taking in oil and certain other commodities, after the IMF scaled back its growth projections for the US and Japan, and after the IEA warned that $100 oil is beginning to impact the global economy.

"There are real risks that a sustained $100-plus price environment will prove incompatible with the currently expected pace of economic recovery. The surest remedy for high prices may ultimately prove to be high prices themselves" opined the Paris headquartered International Energy Agency.

Meanwhile, Goldman’s research notes that made the rounds among traders on Monday said that the bank would "temporarily exit" its bets on higher copper and platinum prices. The Goldman team pointed to the same threat of high oil prices as potentially slowing economic growth and cutting near-term demand for [at least] these two commodities.

The inflation fears which had been used as the principal excuse for the recent marathon runs in certain commodities were dealt quite a bit of a setback by the IMF/IEA gloomy findings. In effect, the demand destruction alarms we first witnessed in mid 2008 were sufficiently loud to temper the rampant speculation on display up to this point. As a result of Tuesday’s rush for the exits, the CRB Index fell 1.9 percent while black gold lost 3.3% and came down to near the $106.00 level. Gold was not immune to the sell-off and also lost the most value in circa four weeks amid such selling. More on the CRB and commodity cycles, later in this post.

The aforementioned stabilization efforts resulted in the midweek session opening on the positive side for the precious and noble metals’ complex. Spot gold rose $5.00 per ounce to open at $1,458.80 this morning while silver was ahead by 23 cents and started the day at $40.34 the ounce. First-line support in the yellow and the white metal is currently pegged at $1,447 and at $39.78 respectively. Platinum and palladium gained $11 and $10 respectively and were quoted at $1,782.00 and at $770.00 on the bid-side in New York. Rhodium remained at $2,300.00 per ounce after having slipped $30 on Tuesday.

In the background, crude oil managed a 40-cent gain (to the $106.65 level per barrel) and the US dollar fell marginally (0.06) to a quote of $74.80 on the trade-weighted index. Nervousness and volatility will likely continue to be felt for the rest of today’s session, albeit the economic calendar is relatively light on impactful data to come save for the release of the Fed’s Beige Book. Thursday will have a sufficient amount of attention-grabbing statistics to parse however.

At this juncture, players are focusing on tonight’s watershed speech on budget issues by US President Obama and on the weekend’s upcoming Washington meeting of the G-20 nations. Mr. Obama is expected to lay out a course, a timeline, and specific figures that are related to trimming the federal deficit of the US. Certain ‘sacred cows’ are involved in the proposed cuts as well; among them, the military spending (still at the core of the problem percentage-wise) and certain entitlement programs. The President has kept most of the details of his presentation under wraps thus far, irking his GOP opponents. What else is new?

As for the G-20, the group will be attempting to come to grips with still-present global imbalances but is not expected to address currency exchange rates at this time. Markets expect the production of a finger-pointing list by the G-20; one that will identify the countries at fault for placing the global economy at risk via their trade balances and/or investment flows and domestic deficits. Thus, Mr. Obama’s speech could not come at a better time. The IMF has also (just yesterday) pointed out that the US needs to speed things up in the budget deficit-slashing department, lest it causes the bond markets to lose faith in the country’s ability to tackle the problem. Mr. Obama has stated that he wishes to halve the US federal deficit by the end of his first term. In order to do so, the US needs to trim its shortfall by 5% of GDP during 2012 and 2013’s fiscal years.

The IMF did not single the US out however, and stated that "all advanced economies must make steady annual progress in cutting debt burdens."

Now, for a moment, do take a look at the chart of the commodity "Himalayas" below: 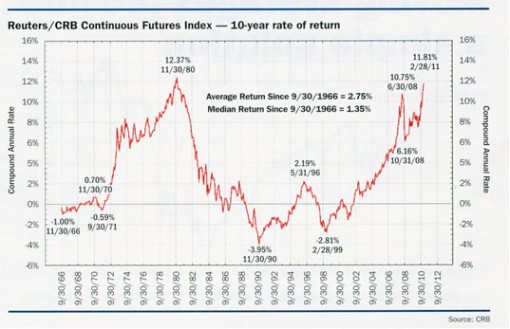 The picture that "speaks" 1,000 or more words shows us that the all-time overvaluation in the commodities market took place in 1980. A recent article in Futures magazine by Shawn Hackett (a respected commodities broker and author of the Hackett Money Flow Report) identifies what is likely "wrong" with this picture as well, at this time. As the image shows, at the record overvaluation in 1980 the ten-year average return on commodities stood at 12.3%. Quite often, the most reliable measure of over or under-valuation in commodities is the ten-year average return of same.

The next such peak of over-valuation occurred in 2008 at just below the 10.75% level (and then the complex crashed during the summer of that year). Where are we today? Well, it turns out that index is presently well beyond the 11.81% level that it touched back in February of this year. Mr. Hackett observes that "this suggests that commodities are currently near the most overvalued levels in 200 years." The author also notes that "gravity always wins out in the end by bringing a particular asset back down to normalcy, no matter how bullish the fundamentals appear to be at the time." Mr. Newton would be proud of that restatement of his famous Law. Today’s apple tree is loaded. Any investor wishing to be fully informed about all aspects of such markets might do very well to give Mr. Hackett’s solid work a read.