Proving once again that explosive geopolitical developments trump any and all bullish wagers made on anticipation of future inflation, or the future fate of the US dollar, gold prices soared on Monday as the "Jasmine Revolution" (or, will it eventually become known as the "Twitter Revolt?") spread and intensified.

Any bearish thoughts among traders were placed on temporary ‘hold’ on Monday, amid such conditions as the missive of the day read: "Fear and Hoarding Worldwide." No need for gold "gurus" to trumpet the obvious and time-tested wisdom of a ‘war insurance’ position in gold all over the media at this juncture. They did it anyway however, just in case folks were…distracted.

It’s as if the G-20 had not even taken place this past weekend. Who was going to care about post- G-20 meeting briefings when Benghazi buckled and Tripoli teetered? In brief, when bullets fly, gold tends to do the same, and, that, it sure did yesterday, despite the closure of the pivotal New York market. The fallout of white-hot embers from the recent events inTunisia and Egypt has now landed as far away as Morocco, Iran, and -over the weekend- even China, and they are sparking social unrest on a scale not seen for many decades.

People in various nations have evidently had it with oppressive regimes and with keeping the privileged few in…privileged positions. Most of the developed world has been left speechless (and, largely action-less as well) by all this, but the rising levels of apprehension are quite palpable in the West as the grassroots upheavals keep spreading at the speed of the Internet. Although Mr. Gaddafi, seen here sporting a rather forced smile and declaring that he is in fact not yet in exile (along with other poetic utterances) 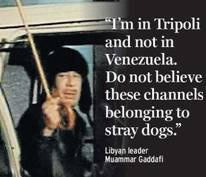 responded with tanks and planes to the demands of protesters, his grip on power remains as fragile as the umbrella he is holding against the winds of change in his country. Several Libyan officials have resigned and some fighter jet pilots defected to Malta rather than add to the bloodshed that has already reportedly resulted in the death of some 400 civilians. Memo to Gaddafi BFF Hugo Chavez: Do keep that guest-room bed made for "The Colonel" just in case he signs up to star in a sequel to "Out of Africa."

Had Monday been a ‘normal’ trading session, we might have well have had a $30 up-day in gold in New York. True, the US dollar received its ‘fair’ share’ of safe-haven bids, as it continues to, this morning as well, but just look at crude oil igniting and flaring up into a 5% to 7% (larger than Friday) fireball of value on the back of deepening Libyan chaos. We are talking about the fourth largest provider of black gold on the African continent here, and the threat of supply disruptions in the wake of possible acquisition of the control of power by Libyan separatists is as real as the gains we saw in the commodity on Monday, as well as this morning. Meanwhile, Saudi Arabia’s oil minister said this morning that his country hasample spare capacity and could easily cover any potential shortfalls in crude oil supplies resulting out of the Libyan situation.

While Europe stands to feel the brunt of any glitches and/or huge spikes in the flow or prices of crude (not to mention the possible influx of desperate humanity trying to flee the various maelstroms), the rest of the world is also watching all of this with a very worried eye, as it might not take much to morph the emergent global economic recovery into something quite…the opposite, given the development of certain scenarios that are best left not entertained. So-called "recovery" metals (copper) fell hard in the wake of the events that present the potential for a return to difficult global economic conditions.

Thus, volatility continued to be on display in the precious metals, crude oil, and currency markets as the world watched the unfolding of momentous events across parts of Africa and the Middle East. Following yesterday’s climb up the wall of Tunisian revolutionary worry, gold and silver both fell back somewhat due to early New York-based profit-taking. This morning’s decline in gold was the first such change in direction in seven days, although the $1,400 level managed to remain in focus (and still standing) during the early minutes of trading.

The markets opened with a $3.90 loss in gold (quoted at $1,403.00 per ounce on the bid side) following an earlier dip to near the $1,390.00 mark. Some of the retreat in bullion was chalked up to the continuing and mounting safe-haven bids that were flowing in the direction of the US dollar amid the turmoil in Tripoli. Although not quite ready to note a change in trend, some traders remained on the cautious side as the situation remains fluid and as news flows are being monitored with one hand on the trading button.

On the other hand, sizeable unwinds in silver (down 102 cents, or 3.01%, to $32.89 at last check, nearly undoing Monday’s hedge fund-driven frenzy) and the noble metals were clearly attributable to the cashing in of some mighty profitable chips by assorted fund players who had seized the opportunity provided by the spreading social unrest in various nations to push prices aggressively higher in recent sessions. UBS reports that it estimates a 31 million ounce surplus in the silver market for the current year.

Platinum dropped $31 to touch the $1,816.00 mark this morning, while palladium slipped $23 lower to reach the $832.00 level per ounce. Rhodium was off by $25 but was still showing $2,400 on the bid side this morning. No such problems for crude oil on the other hand, this morning. Black gold advanced $6.67 (7.7 percent!) to the $92.82 level per barrel as the threat of supply disruptions remains at front and centre among traders of the commodity.

The Dow fell fairly hard (75+ points) this morning as an amalgam of jitters over the Middle East situation and how it might affect the economic recovery, the latest findings by Case-Shiller, pointing to a 2.4% y-o-y drop in US housing values, and declining sales at the world’s largest retailer — Wal-Mart — put a damper on recent equity market enthusiasm. Some of the losses were recouped in the wake of the best US consumer confidence reading levels in three years’ time. The index leaped to the 70.4 level even as the view remains in place that current US economic conditions could, indeed, be better than they are.

Finally today, some of the enthusiasm (and it was widespread as can be, replete with titles such "Analysts and Investors Extremely Bullish on Gold" and unequivocal"observations" such as: "gold and silver are heading only one way") that followed last week’s release of 2010 gold demand figures (part of which we dissected here for a more…balanced view) is not shared by a few financial planners out there, regardless of the most recent resurgence in values.

Does any of the following imply that you ought to be gold-less in your asset allocation pie? Why, of course, not. There is enough uncertainty present in the global economic/social/political scene to warrant a healthy (10%) dose of gold "immunization." That said, (and, hopefully, done), there are some who would like you to consider some sobriety amid the generalized euphoria (see Paulson/Einhorn/Faber/Rogers et al.):

"Patrick Connolly, financial planner at AWD Chase de Vere, said: "Gold has risen hugely over the past decade and the easy money has been made. It would be no surprise if the price of gold falls over the next 12 months and it could fall quite fast. Asset prices tend to overshoot in bull markets and fall too heavily in bear markets. If the price of gold does continue to rise this year it is likely that the fallback, when it happens, will be even more dramatic. We are wary of investing money into any asset that has risen so much in value and encourage investors not to be enticed by short-term market sentiment or recent past performance."

"Gold is now firmly in this camp and the rapid rise to around $1,400 looks like we are getting into bubble territory. I am sceptical [sic] of the inflation-protection offered by gold; its record is patchy, whilst over the last 10 years returns have been spectacular, anyone holding gold in the 1980s and 1990s had a miserable time, typically suffering a reduction in value of more than 50%. As the global economy recovers and governments pay down debt, I expect gold will lose some of its sheen as the ultimate safe-haven."

Back to Al-Jazeera stories.