As Friday’s trading sessions got underway, gold appeared set to complete its best weekly gain of the current year and silver orbited around the $32 level — a fresh 30-year peak-following yesterday’s fund feeding frenzy that added a dollar and a dime to its value, and, much, beyond-bullish sentiment, to the camp that refuses to see it for being a bubble in the making.

Why, one bullion dealer (unsurprisingly) declared that not to possess silver at this time should land one in an asylum, after first being checked for deficiencies on the mental front. Yes, and in October of 2005, David Lereah, chief economist of the US National Association of Realtors declared that [US] "housing activity will remain healthy for some time to come" as well…

Silver’s recent gains have certainly made for some interesting headlines, but here is a friendly reminder that such occasional performance comes with a commensurate (some would say: out-sized) degree of…risk. The table speaks for itself: 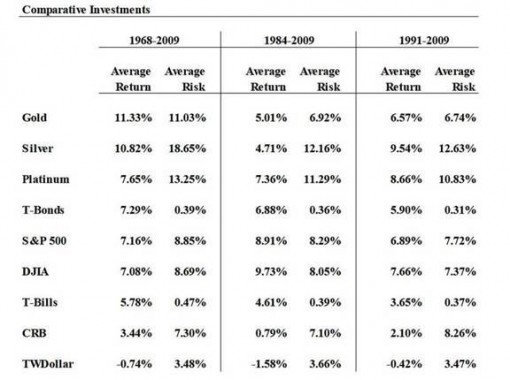 Thus, while a core 10% gold holding is very much advisable for most investors with assets worth protecting, perhaps, silver (the single riskiest asset in this group) should be approached with the discipline once manifested by one, Mr. Buffett. Investors who did not exercise such ‘discipline’ and piled into $52.00 per ounce silver, hot on the heels of the Hunt Bros., in early 1980, are still waiting for $138.00 (inflation-adjusted) silver in order to…break even on that ill-timed bet.

That noted investor doubled his money (having bought 130 million ounces near $5 and having sold it all at under $12) and was ‘out’ of that trade without remorse. And, no one should label you as a "lunatic" for exercising your right to be without it for a period of time, as you might see fit. Meanwhile, get ready for $35 silver, we are told. Or, equally, get ready for $25 silver, we are also told. How do you think tables such as the one above are eventually constructed?

Separately, palladium prices spiked to a ten-year high overnight, reaching $855.00 the ounce, while platinum touched $1,849.00 as funds continued to press hard in that niche as well. Rhodium actually slipped by $20 to touch $2,410.00 per troy ounce. It was learned yesterday that certain primary users of noble metals — Corning among them- are now stockpiling essential supplies of same in an attempt to secure price insurance at a time when spec funds (via ETFs) are de facto also hoarding the PGM group metals in warehouses.

While gold prices got a further overnight lift from continuing social commotion in the Middle East, its advances beyond $1,385-$1,390 were somewhat hampered this morning by yet another (50 basis point) hike in bank reserve requirements executed by China‘s policymakers overnight. That further tightening maneuver was apparently not enough, and the country’s Ministry of Commerce also released a draft measure to control food prices starting in the very near future (perhaps as early as the second quarter).

Inflation combat was apparently also on the mind of the ECB‘s Executive Board member Lorenzo Bini Smaghi. The gentleman stated this morning that:

"it is a key challenge for monetary policy to avoid spillovers and maintain inflation expectations in check. This requires the ability to take pre-emptive actions, if needed."

Presto: bets that the ECB will indeed hike rates are suddenly clustering around the month of September.

While not exactly using such ‘harsh’ words as ‘pre-emptive action’ or similar, Dallas Fed President Mr. Fisher also concluded yesterday morning that "central bankers have done enough to provide liquidity to the US economy and that:

"I cannot foresee any circumstances at present that would lead me to support any further initiatives on that front."

The keywords in that sentence: "any circumstances." Separately, the head of the Chicago Fed, Mr. Evans, one of the most ‘dovish’ of the US central bank’s policymaking members, cited June as the time when the Fed’s QE2 program "most likely" comes to an end, and will not be extended into any form of QE3, or similar.

In Paris for a Bank of France conference and the upcoming G-20 summit, Mr. Fisher’s team leader, Mr. Bernanke, defended the Fed’s extant bond purchase program and exonerated it from culpability when it comes to being the cause of current global imbalances and rising inflationary trends.

"rising consumer prices, a byproduct of the recovery from the worst recession since World War II as commodity costs surge, have put higher interest rates back on the agenda as the rich world grapples with a debt overhang and developing countries try to escape the boom-bust syndrome. With China, the emerging world’s dynamo, four months into a rate-rise cycle to put a lid on surging inflation, the specter of higher prices casts a political as well as an economic shadow over the two-year-old global upturn."

"A burst in food prices was behind the democratic uprising in Tunisia, spilling over to Egypt and neighboring Arab countries with the potential to remake the balance of power in the Middle East. Dairy, sugar and grain costs spurred food prices to another record last month, and the World Bank this week said that climb has pushed 44 million more people into "extreme" poverty. Oil prices last month reached the highest level since 2008."

Such pivotal topics (as well as the turmoil in the Middle East, which is closely linked to all of this, as seen above) will be very much at the front-and-centre of the discussion tables when the G-20 will gather in the City of Lights for a two-day huddle. A new name was added to the list of places in the world where anti-government protests are now flaring up: Djibouti. Hard to see where speculators would want to go home ahead of the upcoming long weekend without some "protection" lining their positions. Then again, weekends such as these are the times when policy shifts and systemic changes sometimes take place.

CoinNews.net - November 28, 2022 3
U.S. money production in 2023 will remain fluid for a third straight year, according to a 2023 Federal Reserve order for banknotes submitted earlier...