The uncirculated 2011 Mint Set, one of several core United States Mint annual products, got off to a solid start. Although similar to the 2011 Silver Proof Set and the 2011 Proof Set, its sales debut was slower as compared to past years. But that theme has been a common trend across many products for the last several years. 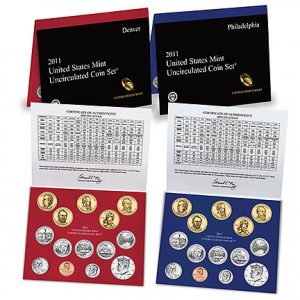 The 28-coin set, which contains collector uncirculated versions of the coins minted for circulation, went on sale February 8, for a price of $31.95. By Sunday, February 13, buyers picked up 191,391 sets, earning the Mint just over $6.1 million.

Last year’s issue opened at a touch over 200,000, but it was also released much later in the year. The United States Mint in 2011 began offering its major products much earlier in the year in a plan to have them available for a longer period of time and for more occasions. Many annual sets are often purchased as gifts for birthdays, new births and holidays.

The following chart of recent sales shows how the sets have performed during their opening days of availability.

*US Mint sales figures as of Sunday, February 13.

Last year’s set may still be purchased. Its weekly sales rose by 1,861, with the latest total shown in the table above.