The United States Mint has taken a new approach in coin releases that goes beyond offering core numismatic products early, like the already issued clad and silver proof sets. 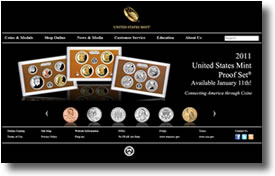 The US Mint on its website (http://catalog.usmint.gov/) has made available a 2011 product schedule that ranges from January through December. And it has published prices for those products through the Federal Register, the official source of notices by government agencies.

The US Mint in the past had kept collectors informed of most product releases, but scheduled launch times were often learned just weeks or a few months ahead of time. Many product prices were known just days before their release.

*Prices are set and then adjusted weekly based on the prevailing market prices of precious metals.

The US Mint has also determined the various product prices for its 2011 Commemorative Coins. They have broken them out with introductory pricing per coin denomination. Prices for those follow:

The US Mint has not announced how long it will keep the introductory prices in place for the Medal of Honor products.

As the numismatic product schedule shows, the major unknowns are when and what the US Mint will charge for the collector America the Beautiful Silver Coins and the American Silver Eagle Uncirculated Coin.

The former is a new series of 5-ounce, 3-inch diameter coins composed of .999 fine silver that feature the same designs as the circulating America the Beautiful Quarters®. The US Mint has already indicated that it has finished producing the 2010 issues with a mintage of 27,000 across each of the five designs. Last year it said they would be available during the first quarter of this year. It is presumed that the 2011 issues will be available this year as well. The bullion 5-ounce versions from last year that were intended for investors have all been sold by the Mint. The bullion versions for this year have not been issued as of this writing.

The collector uncirculated American Silver Eagle, of course, has not been minted since 2008. And while the US Mint also had last year’s issue listed on its product schedule with a "TBA" notice and ended up not producing them, the passage of the Coin Modernization Act last year authorizes their mintage even when there is unprecedented demand for the bullion coins.

Once again you have the price of the 2011 uncirculated mint set wrong. It will be $31.95, the same as the proof set and NOT $49.95 as listed. This is the second time this error has been made. How can you expect anybody to trust the information you publish if you continuously publish the wrong information?