The last trading session of 2010 got underway with additional gains in many commodities. Most agricultural, livestock, and base metals values were indicated higher, while energy futures were off marginally, albeit crude oil appeared set for its highest year-end closing since 2007. Precious metals added value as well, and although we will not await final numbers from the closing bell later today, the tally for 2010 is shaping up as noteworthy.

Perhaps even more worthy of analysis is the fact that 2010 marked the first year since 2005 that…everything rose in concert. Certainly, that is not the ‘normal’ order of the market universe, but the influence of investors chasing yields overturned such norms. Stocks, bonds, the dollar, and commodities all gained as the dreaded US ‘double-dip’ did not materialize, China continued to consume ‘stuff’ and as Europe escaped an implosion.

Such conditions intensified the hunt for profits among funds and they led to huge sums of money flowing into relatively small (commodity) markets. The results (ever since the expectations of a QE2 became manifest in late summer) ‘speak’ for themselves in this Bloomberg graph showing the major commodity indices it tracks (CMCI, GSCI, RJ/CRB, and Rogers): 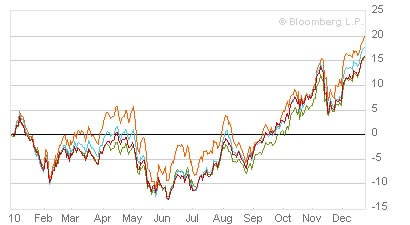 A roughly 29% gain for gold, and an 81.6% one for silver could be etched into recordkeeping books by day’s end. Platinum ‘lagged’ such performance with a 20% gain for the year. Palladium, on the other hand, outshone all of its peers (and its yellow and white cousins) with a final showing that amounts to a better than doubling in price. As has been underscored in these columns, if it is performance that one seeks, look to the nobles’ group as it operates on a set of fundamentals’ metrics that are quite different (read: better) than those currently manifest in gold and silver.

Speaking of pure performance, a related mutual fund, the Dynamic Gold & Precious Metals I (DWGOX) fund holding 38 popular miners (familiar names such as Goldcorp. Barrick, Romarco, and Osisko among others are all in there) took Morningstar’s top performer of 2010 label, posting a 71.3% annual return.

Two potential impact factors for the fundamentals in at least two and possibly all five of these metals came to light on the last day of the year. First, from Kyoto University in Japan, comes news that a scientific team has created a palladium-like alloy using rhodium and silver. Nothing short of modern alchemy, the nanotech-based fusing of one the two metallic elements promises some exciting developments down the road. You may recall that Kitco introduced a ground-breaking physical investment product in rhodium earlier this year, with the creation of pure rhodium sponge jars in various weights.

On the gold fundamentals’ front, the China National Gold Croup Corp. said this morning that vast gold reserved have been discovered by its subsidiary, China Gold International Resources Corp. Ltd. at its Chang Shan Hao mine in Inner Mongolia. Without giving estimates of the total reserve in question, the firm said that it had run across the best ore sample it has analyzed this year, and that based upon such examination there is "strong reason to believe that the SCH gold reserve has great growth potential."

Additional gold flowing from the world’s currently largest producer of the metal bears watching as we go forward. It is an open secret that given the size of the gold surplus in the current fundamentals’ equation, investment demand must continue to absorb somewhere north of 1,700 tonnes of the precious metal in order for prices to simply remain near where they are as 2010 draws to a close.

The flow of predictions as to why such type of demand may flourish or wither in 2011 are definitely not in short supply as the world gets ready to usher 2011 in. Never mind that next year is supposed to be the last full one before the Mayan calendar’s ‘prediction’ of TEOTWAWKI wipes the global slate ‘clean’ at the end of 2012; the crystal-ball readings already in place for 2011 are even more…dramatic. A small sampling follows:

"Federal Reserve Chairman Ben Bernanke may resign in late 2011 as deflation continues to dash hopes of strong economic growth in the U.S. economy. Bernanke’s resignation would cause a decline in the price of gold, but until then the precious metal is still likely to rise."

This, according to Jim Walker, founder and CEO of Asianomics, as opined on CNBC this morning.

No parameters were on offer by Mr. Walker as to how low gold might go, or, for that matter, how high the subsequent rise might reach. Other analysts (such as Anderson Cheung of Mitsui Bussan Precious Metals in Hong Kong) were more…precise, citing a case for gold to touch $1,550 and then ‘slump’ to $1,350 after mid-year 2011.

The roughly mid-2011 period appears to preoccupy yet another market observer as well even if allowing for a similar, $1,500 – $1,600 top in the metal, and not advising shorting it at this juncture. The research paper by a Russian Academy of Sciences team upon which the Options Insider piece is based can be yours (all 15 pages of it) by navigating to this link.

A similarly wide (1,200 – $1,600) range was envisioned by Cantor Fitzgerald Capital Markets’ Bruce Wong, who sees a roughly 9 percent rebound in the US dollar on the index for next year and a 15 percent downside risk in bullion. Finally, PBS’ Nightly Business Report hosted a bull/bear ‘what’s in the pipeline’ debate during which targets of $1,500 to $1,650 were mentioned, but not without the mention of the fact that such feats are plausible in a market that has "disconnected from macroeconomic fundamentals."

Asianomics’ Mr. Walker also offered the conclusion that "the euro is finished in its current form. I think there will be an exodus of countries from the euro that just can’t stand the pain."

German Chancellor Merkel might have something to say about that, as she stresses in her upcoming New Year’s Eve speech that the "euro is the basis of our (the EU’s) prosperity" and that "Germany needs Europe and our common currency."

Mr. Bernanke could not be reached (not that we tried) for comment on his putative resignation plans, although is probable answer is not difficult to fathom. For the moment, the Fed Chief is probably pleased to hear something that was not in the news pipeline for the past couple of years; that US banks are finally starting to open their lending spigots and that more of the same is in store for 2011.

As for what else might be in store for the coming year, the one thing that is certain about any of it is the fact that uncertainty and surprises will not be lacking. While "easy money" may be less "easy" to make following what has already transpired, opportunities will also not be in short supply.

Wishing You and Yours a Very Happy, Healthy, Peaceful, and Most Prosperous New Year!

Thank you for your loyal readership.

www.kitco.com and www.kitco.cn
Blog: http://www.kitco.com/ind/index.html#nadler
Article:
The (Crystal) Ball Is In Your Court